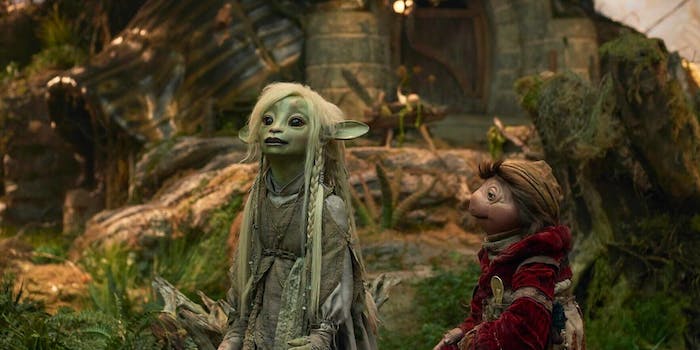 ‘Dark Crystal: Age of Resistance’ is all about apocalyptic climate change

Steeped in elaborate fantasy worldbuilding, The Dark Crystal: Age of Resistance is an apocalyptic parable about climate change.

Like the Star Wars prequel trilogy, Age of Resistance explores how a despotic regime came to power. The original 1982 movie was a simple quest story about two elf-like Gelflings defeating the evil Skeksis who conquered and polluted their world. Using puppets and miniatures, the Jim Henson Company created a gorgeous setting that laid the groundwork for the new Netflix series, which retains the family-friendly tone while digging into some deeper political themes. The Skeksis are as creepy and gruesome as ever—something that’s missing from a lot of recent children’s programming—but the sense of existential dread is ultimately more disturbing.

At the start of Age of Resistance, the Skeksis’ toxic influence is beginning to change the world of Thra. Poisoned by tendrils of malevolent purple magic, animals go mad and Gelfling crops succumb to blight. Disrupting a previously balanced ecosystem, the Skeksis are now worshipped and trusted as godlike leaders by the seven Gelfling tribes. They live in luxury, protected by Gelfling guards and supported by Gelfling tribute, even as famine sets in. When the hero Rian sees the Skeksis kill one of his friends and drink her life-essence (a method of prolonging their lifespan), he’s shocked. But when he tries to tell his community the truth about their beloved overlords, they prefer to believe that he’s delusional. Much of Age of Resistance is about persuading people out of denial, while the world tangibly decays around them.

Informed by the New Age roots of the movie, the show’s worldbuilding relies on familiar fantasy tropes. Ideas about “bringing balance” and defeating tyrants are common themes in the genre, but it’s rare to see climate change placed so explicitly in the foreground. The titular Dark Crystal represents Thra’s natural resources, controlled by the Skeksis so they can live in perpetual luxury—an unpleasant, insular community of selfish sadists who backstab and torment each other at every opportunity. Meanwhile, the rest of Thra’s inhabitants live closer to nature, and would clearly be happier without the Skeksis’ influence. However, the show doesn’t portray the Gelflings as innocent victims. Some live in naive denial about the Skeksis’ true nature, while others – particularly the queen Maudra Mayrin and her daughter Seladon – actively support an unjust system. Bribed with wealth and proximity to Skeksis power, the queen turns a blind eye to the oncoming blight.

The show’s three Gelfling heroes only fight back after they’ve been jolted out of complacency. Rian sees his friend killed and drained by the Skeksis. Deet witnesses the effects of the Dark Crystal’s corruption, poisoning her animals. Brea, a princess who grew up in the Skeksis’ seat of power, is radicalized by her desire for forbidden knowledge, punished for challenging her mother’s loyalty to their overlords. Other Gelflings – even their friends and family – remain complacent in the face of obvious evidence that the Skeksis literally want to kill them. Brea’s sister Seladon effectively becomes a climate change denier, and while the Skeksis may seem transparently evil and tyrannical to us, it takes a full season for Deet, Rian and Brea to drum up a rebellion. Which is a pretty realistic struggle, considering our own difficulty in tackling climate change and its causes within capitalism.

While The Dark Crystal: Age of Resistance is an optimistic show with plenty of charming subplots about solidarity and forgiveness, it has a dark subtext for anyone who watched the movie. Because, of course, this prequel can’t have a happy ending. The Dark Crystal takes place in a post-apocalyptic period where almost all of the Gelfling have been wiped out, and much of the beautiful wildlife from Age of Resistance is probably extinct. The Gelfling rebellion must inevitably lose.

Age of Resistance will be watched by plenty of adults, both longtime fans and Netflix newcomers, but it’s clearly suitable for kids, with storytelling and humor that a seven-year-old can digest. It’s also deliberately scary, sad, and weird, which sets it apart from contemporary trends in children’s media. Actor Taron Egerton (Rian) argues that the show’s inevitably downbeat conclusion is integral to its appeal. “I do think melancholy is an intrinsic part of it,” he said at a press conference, referring to the long-lasting appeal of the movie. Meanwhile, Jim Henson Company CEO Lisa Henson argued that the show was still “hopeful.”

“What’s gonna happen to us, you know centuries from now? We don’t know. We just kind of have to live our daily lives and win the daily battle. We think this is a really hopeful and inspiring story about heroes who, when faced with a really scary and mysterious threat—which is what the Skeksis are doing to them and threatening their very life essence—you know, they manage to pull together and fight as a team.”

So the show simultaneously offers a realistic analogy for climate change and the inexorable spread of its long-term effects, while also telling an uplifting story about revolution, empathy, and cooperation. You’re free to interpret that as optimistic or pessimistic, but either way, it feels like a rare beast when so much of pop culture is determined to ignore climate change altogether.