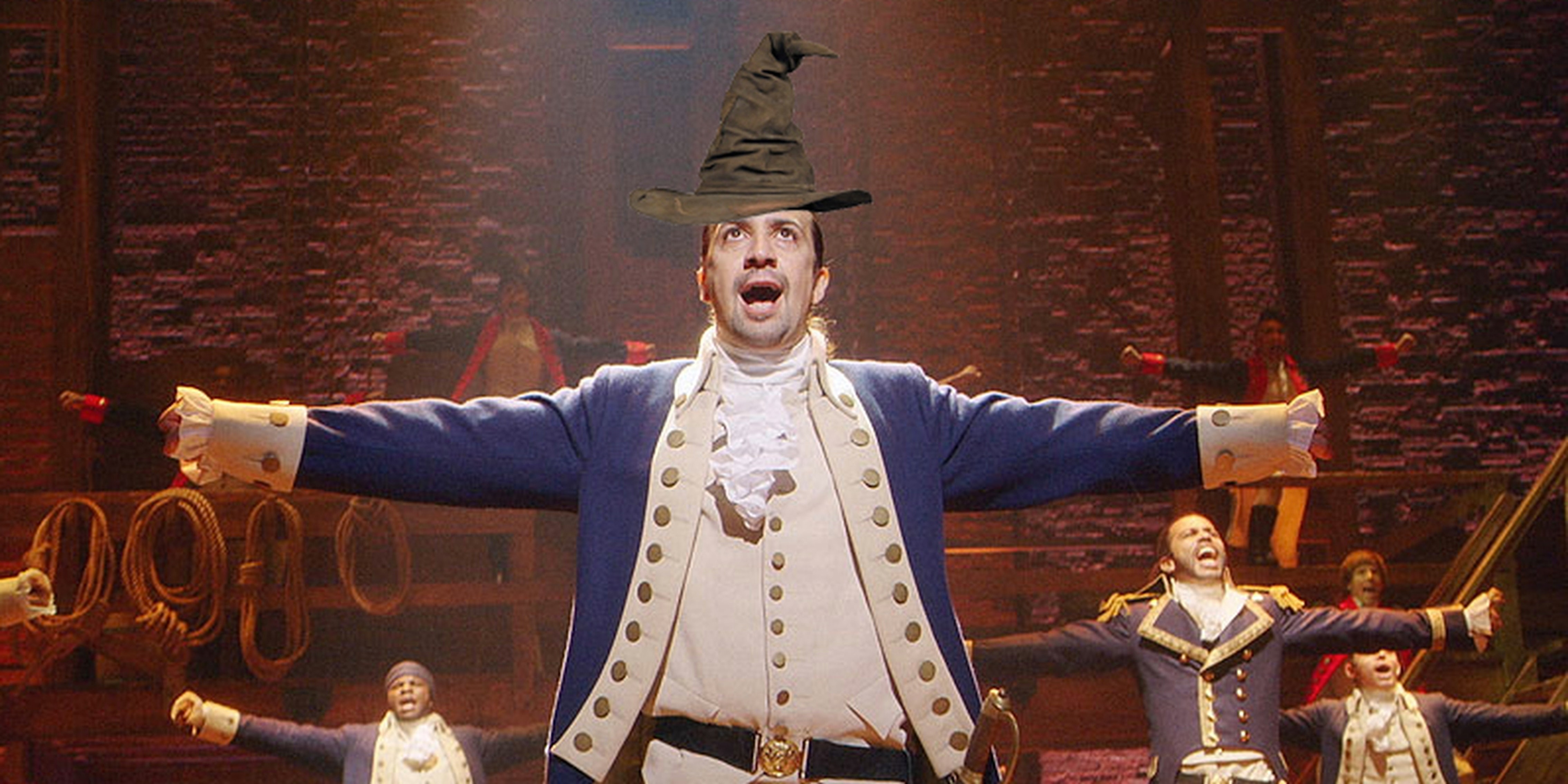 The cast of ‘Hamilton,’ sorted into proper ‘Harry Potter’ houses

Ravenclaws built our nation (and other 'Hamilton' Sorting Hat truths).

Is Daniel Radcliffe right about our favorite founding father? Harry Potter himself showed up at a performance of Hamilton this week to give his esteemed opinion on which Hogwarts House his fellow revolutionary belonged in.

DanRad’s not alone. At Broadway Con over the weekend, one of the most highly anticipated panels was Saturday’s Sorting Hat panel, in which fans gathered to vehemently argue for which house various Hamilton characters belonged in.

It’s clear that everybody has an opinion on whether Alexander Hamilton is a Gryffindor, Ravenclaw, or Slytherin. (No one really thinks this dude is a Hufflepuff.) But what about Thomas Jefferson? The Schuyler sisters? Luckily, we’re here to sort(ing hat) it all out.

Before the Slytherins get up in arms: Yes, we know A.Ham is a Slytherin in many respects. Yes, we know he literally compares himself to Macbeth and sings “ambition is my folly.” Yes, we know Lin-Manuel Miranda, who basically is Hamilton, sorted himself into Slytherin. But hear us out.

Most accurately, Hamilton is a Slytherclaw (a Slytherin/Ravenclaw hybrid) with unfortunate renegade Gryffindor outbreaks of brashness, rashness, and earnestness. We all know J.K. Rowling‘s Sorting Hat favors certain personality traits above others, however, and so we have to choose.

It’s tempting to sort Hamilton into Slytherin at first glance—after all, the guy oozes ambition, strategic planning, and shrewdness. But Alexander also clings to a naive belief in the goodness of everyone around him and an idealistic belief that declaring the truth will make things less complicated, not more. This is a trait we can only imagine actual Slytherins would find embarrassing and mortifying.

Ultimately, Hamilton’s self-taught thirst for knowledge, his deep intellectualism, his philosophical thinking, and idealistic social concerns all put him in Ravenclaw. After all, this is the guy who thought up his own system of government and spent the Revolutionary War learning economics just in case Washington tapped him to be treasurer. We’re with Radcliffe on this one: You can’t get more Ravenclaw than that.

You might be thinking Burr ought to be in Ravenclaw. But if we have learned anything in U.S. history, it’s that the men of his own time distrusted Burr for being unprincipled—which is exactly why the Hogwarts students of Harry’s time, rightly or wrongly, tend to distrust Slytherins. Burr had plenty of ambition—he was an intellectual prodigy who applied to Princeton when he was just 11. He got turned down for being too young, then re-applied two years later—but as a sophomore, the little brat.

We might say that Burr’s intellectualism kept him in limbo and kept him from acting on his ambitions, but as we learn in “The Room Where It Happens,” Burr’s ambitions are what ultimately motivate him to take any action at all—not to mention his jealousy of Hamilton. These are two traits Slytherins can claim proudly. And as we see in the second act, Burr can engage in political manipulations and machinations with the best of them.

As for Burr’s famed lack of principles, George Washington himself, the most Gryffindor man ever to sit on a horse, literally wrote that he couldn’t promote Burr because he was too Slytherin: “By all that I have known and heard, Colonel Burr is a brave and able officer, but the question is whether he has not equal talents at intrigue.”

Yikes! Sorry, Burr, but as every truly great Slytherin has learned, you have to take a side in the end if you want to really get ahead.

Is there really any argument here? Angelica announces herself as a Ravenclaw from the start—she’s looking for minds at work. She’s been reading that great revolutionary philosophical treatise, Common Sense. But for her, intellectualism is more important than bravery—she wants a revelation, not a revolution. Basically, Miranda wrote “Work,” the song where we meet the Schuyler sisters, in praise of House Ravenclaw.

Of course, Angelica also embodies the downside to being a Ravenclaw—much like Burr’s hesitation and reluctance to act, she reasons herself out of a potential relationship with the guy she’s in love with. Oh, sorry, Angelica. Hamilton, Burr, and Angelica each have too much Slytherin and Ravenclaw warring within them not to get tripped up by their own personal pride. (It’s almost as if humans are three-dimensional beings unable to effectively be categorized by a few distinguishing personality traits.)

Wait, did we say humans are too complicated to effectively be sorted? Scratch that. Eliza is a Hufflepuff through and through. She’s no doormat, but she’s incredibly loyal and monumentally forgiving, and her pure-hearted nature ensures that everyone around her loves her. Plus, she devotes her life to clearing her husband’s name and making sure his legacy lives on while doing acts of charity and kindness. Eliza may be our first and only unproblematic sorting. Leave it to the Hufflepuffs.

That’s right—Jefferson is definitely another Ravenclaw. In the age of Enlightenment, is it any wonder so many philosophy-loving intellectuals were running around founding our country?

Luckily, Jefferson and Hamilton wouldn’t have been attending school at the same time, because Jefferson’s hypocritical philosophies combined with his Virginian agricultural pride and ultimately mercenary view of slave-owning would have infuriated the immigrant abolitionist. Despite being an intense philosopher, Jefferson had trouble putting his own ideals into practice regarding the hundreds of skilled slave laborers he bought and built Monticello with. He’s proof that you need more than just Ravenclaw intellectualism and theoretical understanding of good principles in order to be a truly great human being.

If there’s anybody who better sums up the Gryffindor spirit of leaping into the fray and fighting for what’s right than Lafayette, then they probably still can’t drop beats like he can, so who even cares? The guy hopped from revolution to revolution fighting for what he believed in. And he named his own son after George Washington, which is the equivalent of Harry Potter naming his kid Albus in honor of Dumbledore. Face it, this guy is basically the platonic ideal of a Gryffindor.

Say what you will about King George, he may have been a pompous asshole who perpetuated colonialism and slavery, but in the end he just wanted love. Not only is his one song devoted to wanting the colonies’ love, there’s that plaintive line in the reprise: “When your people say they hate you, don’t come crawling back to me.” As performed by Jonathan Groff, our former sovereign comes off in this moment like a sad kid mildly confused about why the other kids don’t want to play in the sandbox he’s ruthlessly taken over and made his own. He’s just as motivated by loyalty as any other Hufflepuff—only he wants everyone else to be loyal to him instead. The takeaway: Even the brightest and bubbliest Hogwarts house can produce a few weeds.