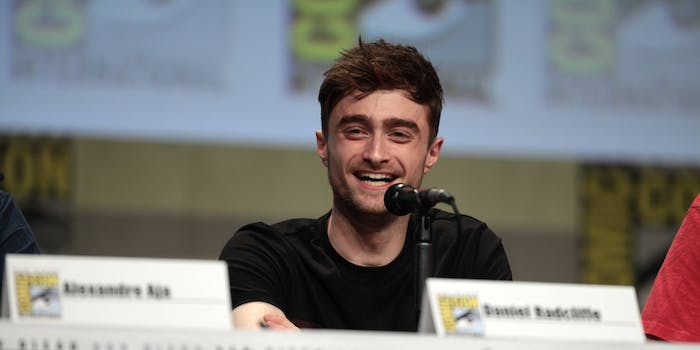 Harry Potter takes to Reddit to answer all your nerdy questions

The social media-averse Daniel Radcliffe gets candid and geeky during Reddit AMA.

Daniel Radcliffe cast a spell on Reddit during his AMA Monday.

Radcliffe, who mostly avoids social media save for a Google+ page, was there to promote Horns, and his fans did not disappoint. They were ready with Harry Potter, Broadway, and Horns questions—but they also learned about everything from what his Halloween costume will be to the time Michael Gambon taught him how to shoot a man in a duel (while holding coffee).

Showing the sort of enthusiasm he’s become known for in the press, Radcliffe graciously answered many of the questions he’s been asked multiple times over the years. But there were plenty of gems. He’s become a Tumblr feminist darling after speaking out against the “friendzone,” and in a recent interview, Radcliffe spoke about the male population’s ease toward “sexualizing Emma Watson” after remarking that he was an “unconventional romantic lead.”

But he’s also become a meme, a fact that he’s fully aware of.

If you didn’t already have it figured out, he’s a geek just like the rest of us. He read Daredevil as a kid, and the recently converted Star Wars fan is so enamored by the series that he may possibly dress up as one of the characters for Halloween.

He also dug through many of the Harry Potter questions, and while he touched on Rupert Grint’s ice cream truck and what happened to all of the Hedwigs, one fan managed to ask him something that, after all the years playing the boy wizard, he’s never been asked: Harry would’ve never had to worry about it, but what about Radcliffe’s Horcrux?

“I was gonna say my iPod, prolly put it in that, but I would put it inside an album on the iPod, so you’d have to open that album,” he responded. “So I somehow want it to be connected to a particular album that means something, like Ziggy Stardust. So that’s how I’d want to do that.”

It’d be a lot harder to find than most of Voldemort’s Horcruxes, that’s for sure.

And he’d totally be onboard for a movie involving him and his apparent doppelganger Elijah Wood in an ultimate case of mistaken identity that often happens in real life.