This is probably the most fun you could have learning basic math.

Making a video game designed purely for entertainment is hard. Making a video game that can entertain and educate seems infinitely harder, if only for how rarely the goal is accomplished. It’s far too easy for the educational goal to supercede the play appeal in that sort of a game.

That’s what makes it so special when a game like The Counting Kingdom, which is available on Steam early access, manages to deftly balance fun and learning.

I am as “core” a video game player as you can get. I’m a male in the 18-40 age range, I gorge on first person shooters and other game genres loaded with action, and if I have the time, I’ll spent at least 20-plus hours a week on my Xbox 360. When the traditional video game industry is making the next Call of Duty or Battlefield, I’m the demographic those developers and publishers are trying to rope in.

Yet when I saw The Counting Kingdom at a game development competition in Boston, Mass., in March of this year, it was one of the only games I wanted to play.

The player dismisses the monsters by selecting a number from one of three cards on the left side of the screen, and then taps monsters to add up to that score, with no diagonal connections allowed.

When I had my demo of The Counting Kingdom, I was playing on an iPad. That made perfect sense to me, what with how children seem to take to tablet devices and how good it felt to tap out the monsters. Steam early access means the game is on PC, first, however. I was surprised by this, so I reached out to The Counting Kingdom’s developer, Jenna Hoffstein. 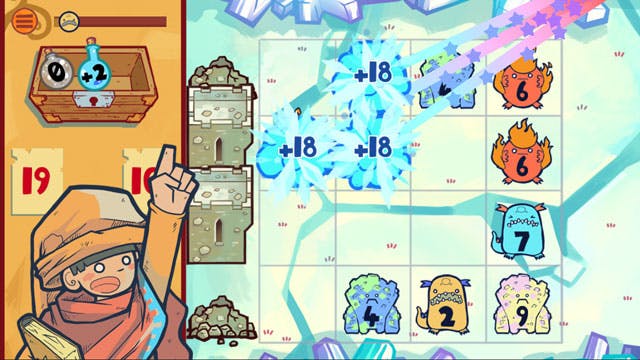 “We’re entering an age where a lot of gamers have kids,” Hoffstein told me via email. “These are people who grew up with awesome educational games, and who are going to want their kids to be playing great games as well. The question, as always, is how can these gamers find the best games for their kids? By launching on Steam we’re going to where the gamers are, and making it as easy as possible to find our game.

“Also, being able to launch on Early Access gives us a great way to engage with our players as we complete development, getting input from as many families as possible to make the game amazing.”

Hoffstein said a challenge that is far too common for iOS game developers is discoverability. With the regular flow of games on the App Store, it’s very easy for a new game to get buried. A Steam release helps to create buzz.

“This is a platform that has very, very few games for kids, so we’re hoping to stand out with The Counting Kingdom,” Hoffstein said.

Releasing on Steam should help Hoffstein combat any questions about value when it comes time for the iOS release. “The simple fact is that people believe PC games are worth more than mobile titles,” Hoffstein said. “If you launch on mobile and then move to PC later, you get a lot of ‘What is this crummy mobile game doing on PC?’ If you start on PC and then move to mobile the reaction is much more positive.”

Of all the hurdles Hoffstein has to overcome, the most difficult one—making a game that can both entertain and educate in equal measure—has already been jumped.