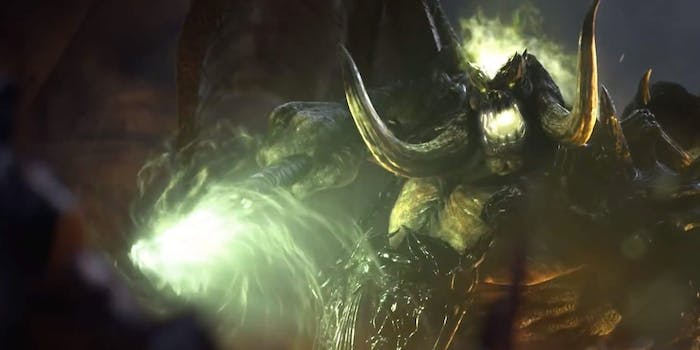 Conan goes on orc killing rampage in World of Warcraft

"Draenor sounds like something you would use to unclog your sink."

Conan O’Brien’s embarrassing cluelessness with video games is usually covered with snappy edits and witty remarks. This time, he was live on camera.

To celebrate the release of the newest World of Warcraft expansion, Warlords of Draenor, Conan decided to give it a try. For a straightforward game like Call of Duty or Assassin’s Creed, Conan’s traditional Clueless Gamer segment is shot in a studio. WoW, on the other hand, is freaking huge, and needed a different approach.

Conan and his geeky sidekick Aaron Bleyaert therefore took to a live broadcast on Twitch Twednesday for their WoW adventure. Conan riffed for a good 20 minutes while fumbling with the game. He denies that he needs stickers on the keyboard to help (he totally does), has trouble figuring out how to use the mouse, and wonders whether all the girls in WoW are actually girls, or men playing as girls.

Think of this as getting a look at what goes on behind the scenes in a typical Clueless Gamer segment. Conan was on the spot and handled himself wonderfully, even if he had no idea what the hell was going on pretty much the entire time.