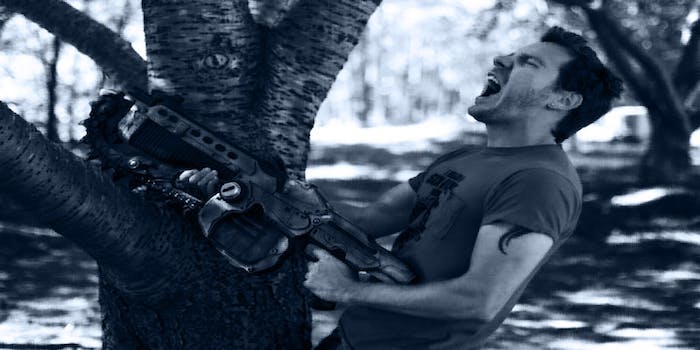 Bleszinski’s bona fides as a triple-A shooter developer are beyond reproach.

One of the biggest names in traditional, triple-A video games is challenging his audience to abandon their prejudice against the free-to-play business model with the development of his arena-style shooter, codenamed Project Bluestreak.

There are very few game developers who justify the appellation rock star. But Cliff Bleszinski is one of them, on account of his outspokenness with the press and thanks to the extremely high profile of the successful, triple-A game franchises he’s designed. When he left Epic Games in October 2012, smart money bet on Bleszinski’s return to game development in the very near future.

Bleszinski stated in January 2013 that he wasn’t interested in starting his own triple-A studio, however, so when he announced the formation of Boss Key Productions last weekend, it was a little surprising. Yesterday’s announcement that Boss Key’s first game, a science-fiction-themed, PC arena shooter code-named Project Bluesteak, will be a free-to-play was much more surprising.

One of the most profitable video games in the last couple of years is World of Tanks, a free-to-play arena shooter-type game, which plays to the core audience. League of Legends is free-to-play, and likewise massively monetarily successful. It’s not as if Bleszinski is blazing new ground on the economic front with Bluestreak.

That said, while attitudes are slowly changing on account of games like World of Tanks and League of Legends, core gamers are still generally suspicious of the free-to-play model. The mobile game sector isn’t always responsible with how they employ the model, and many core gamers are still of the opinion that making free-to-play games means cutting corners on game design.

Bleszinski’s bona fides as a triple-A shooter developer specifically are beyond reproach. He is the former design director at Epic Games on the Unreal and Gears of War franchises. Unreal Tournament, released in 1999, set standards for competitive first-person shooter games.

The co-founder of Boss Key Productions, Arjan Brussee, has FPS credentials to match Bleszinski’s. Brussee was also the co-founder of Dutch developer Guerrilla Games, the studio behind the gritty, first-person shooter Killzone franchise.

The Sony-exclusive Killzone games have been an important part of Sony’s marketing campaigns for new PlayStation consoles since the release of Killzone 1 in 2004 for the PlayStation 2. Killzone 2, released in 2009 was a major early title on the PlayStation 3, and Killzone: Shadowfall was a launch day PlayStation 4 title last fall.

The economic model is sound. The creative talent for first-person shooter design at Boss Key Productions is impeccable. Project Bluestreak, if successful, could play a huge part in finally breaking any remaining prejudices among core gamers toward the free-to-play model.

No information about a prospective release date for Project Bluestreak has been released. Bleszinski has said that his studio will not follow the traditional, triple-A marketing technique of releasing CGI trailers which do not represent actual gameplay. He has also stated that development on Project Bluestreak will be transparent—i.e., the audience will be able to watch the game as its being developed.