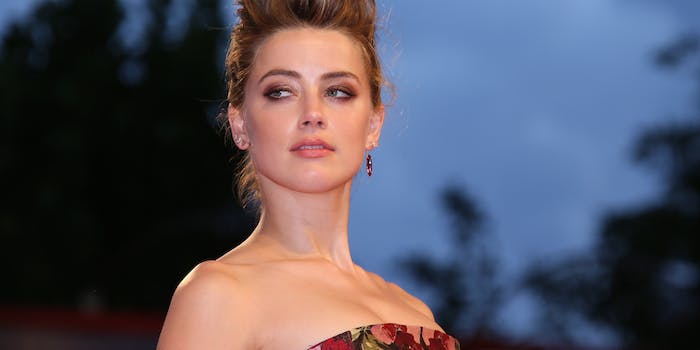 The actress has given money to domestic abuse survivors, and detractors still won't take her abuse allegations against ex Johnny Depp seriously.

The divorce proceedings of Hollywood actors Amber Heard and Johnny Depp reveal that when it comes to understanding domestic violence and abusive relationships, America still has a long way to go.

On Thursday, Heard, who accused Depp of domestic violence, announced that she would donate her entire $7 million divorce settlement to the ACLU for work involving female abuse survivors and to the Children’s Hospital of Los Angeles, where she volunteers.

Despite the massive donation and evidence that backed up Heard’s abuse claims in court, Heard is still being called a gold digger, and that she’s “seeking attention” and lying about the violent relationship.

During the couple’s contentious split, many accused Heard of insincerity on all levels—primarily because she’s 22 years Depp’s junior, considered one of Hollywood’s most beautiful actresses, and was in a public relationship with a woman for five years before meeting Depp.

Heard’s bisexuality was used against her when she claimed Depp was abusive, as gossip sites reported he had a problem with her “lesbian friends” and sexual past. And then when a 2009 domestic abuse incident involving ex Tasya Van Ree came to light, Heard was portrayed as having her own abusive tendencies. Van Ree went on to issue a statement saying the 2009 incident was overblown and “sensationalized” by onlookers (Heard was accused of hitting Van Ree on the arm in an airport), but it did little to halt the character assassinations against Heard.

“It’s disheartening that Amber’s integrity and story are being questioned yet again,” Van Ree told People this June. “Amber is a brilliant, honest, and beautiful woman and I have the utmost respect for her.”

Though many of Heard’s detractors refused to back down after the settlement announcement, she has also grown her fair share of supporters, who took to social media in droves.

Now I ain't saying she a gold digger

Because she isn't, she's a victim of domestic violence#amberheard

Aside from the claims that Heard was after Depp’s money (she is reportedly worth $9 million herself), much of the public skepticism of her domestic abuse allegations reveals a lack of education on what constitutes an abusive relationship.

Heard, like fellow high-profile Hollywood bisexual Lindsay Lohan, has been treated as if she’s somehow deserving of the abuse—whether because she’s not straight, or because she allegedly has her own abusive or sordid history. Cameras recently caught Lohan’s ex-fiancé attacking her on a beach, and the incident was intensely played down by the press, referring to it as a “beach fight” despite the horrific footage showing her male partner dragging her by the hair and berating her in public.

One can be both a perpetrator and victim of domestic abuse. And there is a spectrum of abusive behaviors, ranging from insulting jabs to extreme physical torture and everything in between. Sometimes, both partners are trapped in a cycle of abusive behavior—while other times, the perpetrator/victim scale is more clearly apparent.

According to the New York State Office for the Prevention of Domestic Violence, about 97 percent of domestic violence perpetrators are men with female partners. Another study by the Centers for Disease Control found that bisexual women are twice as likely to be victims of domestic abuse than straight women—and among the bisexual women reporting, nearly 90 percent said the partner who abused them was male.

We may never know all of the details of Heard and Depp’s relationship, but we don’t have to have them in order to see that Heard has bore the brunt of criticism and accusations in the divorce—even after she made such a bold, generous donation.