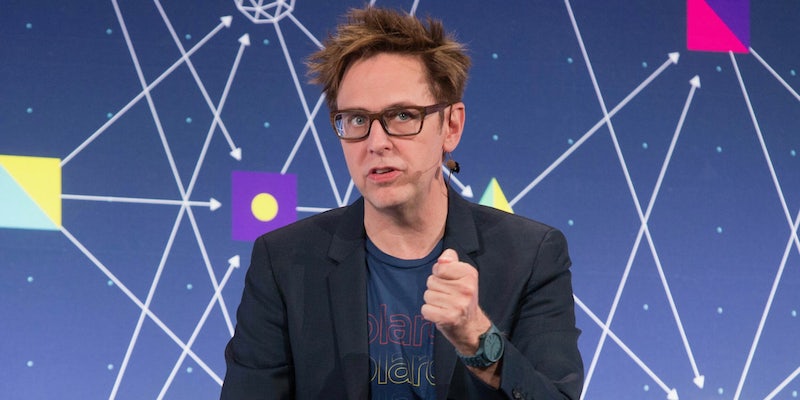 The 'Guardians Of the Galaxy' director is called out by conservatives.

Update: 2:45pm CT, July 20: Disney has fired Gunn for his jokes, according to Deadline and Variety.

Guardians of the Galaxy director James Gunn has apologized for old and offensive tweets that made light of rape, AIDS, and pedophilia and resurfaced online after he voiced his opinion on director Mark Duplass’ now-retracted endorsement of the Daily Caller Editor-in-Chief Ben Shapiro.

Duplass suggested that people follow Shapiro, a conservative pundit, because he supported “crossing the aisle.” For that he was vastly criticized online as those who called him out pointed to previous sexist, racist, homophobic, and transphobic tweets posted by Shapiro. (Duplass later deleted his tweet and apologized.)

Gunn was among those who spoke out, arguing that although people might not agree with Duplass, he believed people should direct their outrage toward the “traitors & racists in the country today.” His thread mentioned Shapiro by name, noting that “personally I think even Ben Shapiro’s mother should unfollow him.”

Soon after Gunn posted his thoughts on the Duplass situation, conservatives searched through Gunn’s Twitter archives and discovered several tweets—some dating back more than a decade and which have since been deleted—from Gunn with rape jokes, jokes about AIDS, pedophilia, and comments characterized as being anti-Semitic.

Yea @benshapiro is an asshole…..yea Star Wars fans need to go to therapy. Ya know, maybe the dog that barks the loudest is the most guilty. Maybe you need Therapy. pic.twitter.com/kH6xp3fNjl

Gunn took to Twitter to apologize for his past tweets, explaining that he viewed himself “as a provocateur, making movies and telling jokes that were outrageous and taboo.” He says that to illustrate that he’s a different person (although, he adds, not necessarily a better one) and views how he uses the internet much differently now than when he posted those tweets.

“I used to make a lot of offensive jokes,” Gunn wrote. “I don’t anymore. I don’t blame my past self for this, but I like myself more and feel like a more full human being and creator today.”

Gunn’s full apology is included below.

1. Many people who have followed my career know when I started, I viewed myself as a provocateur, making movies and telling jokes that were outrageous and taboo. As I have discussed publicly many times, as I’ve developed as a person, so has my work and my humor.

3. In the past, I have apologized for humor of mine that hurt people. I truly felt sorry and meant every word of my apologies.

5. Anyway, that’s the completely honest truth: I used to make a lot of offensive jokes. I don’t anymore. I don’t blame my past self for this, but I like myself more and feel like a more full human being and creator today. Love you to you all.