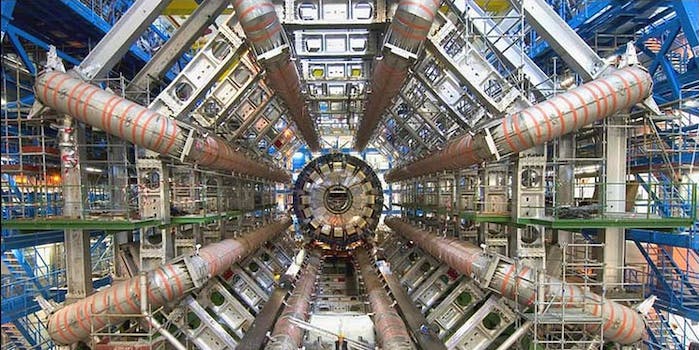 We know CERN found the Higgs Boson Particle—now what?

What are you going to do next?

Use the Large Hadron Collider to ram more particles into each other—at nearly double the previous speed.

In a new groundbreaking paper published in Nature on Monday, CERN scientists proclaimed the discovery as “heralding a new era” in physics, and speculating that the elusive particle could be the key to “possibly completing the standard model of particle physics.”

In the report, scientists reveal that the particle behaves in ways long-predicted by theorists before it was discovered. Essentially, this means that the Higgs Boson breaks down, or decays, into one of two other kinds of particles, bosons and fermions. Think of these as infinitesimal bundles of energy that act upon each other to create all matter as we know it. Bosons are “force carriers,” which means they can act upon fermions, i.e. “matter carriers,” to hold them into place and keep them—and subsequently you—from flying apart and scattering across the universe.

Until the report’s findings, scientists hadn’t been able to observe the Higgs Boson’s decay into fermions, only into bosons. This is because the Higgs Boson is one of the most short-lived particles known to scientists, with a decay path that’s very hard to trace. CERN scientists finally have observed the decay path for the Higgs Boson in both states, and, crucially, for two types of fermions—quark pairs and leptons.

As for what this means, Discovery points out that while the current observations uphold the Standard Model of particle physics, they also aren’t particularly exciting, because they only confirmed what scientists already thought. The findings also failed to point scientists toward further study of dark matter or gravity.

But luckily for all you adventurous physicists out there, soon CERN will be slamming particles together once again, now that a 16-month-long upgrade to the LHC has been completed. CERN announced yesterday that it has commenced a very long cooldown of the LHC, with the goal of running it at almost two times its previous speed.

“It’s effectively a new machine, poised to set us on the path to new discoveries,” said CERN Director General Rolf Heuer at a press conference. CERN has also upgraded its particle detectors, which should hopefully make tracking down the decay path of the Higgs Boson even easier.

Photo by CERN via Image Editor/Flickr