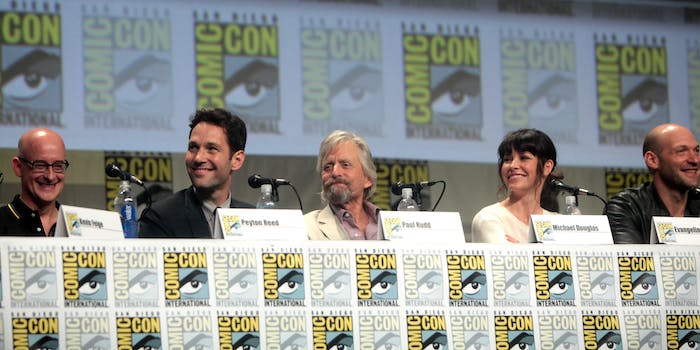 Marvel may have snuffed out original Avenger Janet Van Dyne, but Cassie Lang made the cut.

People are still unearthing interview tidbits from San Diego Comic-Con. The latest comes via the Comicbookmovie fansite, with Ant-Man director Peyton Reed confirming that Cassie Lang (Ant-Man’s daughter) will be appearing in the new movie.

“In the comics Scott Lang has a daughter, and that’s part of the movie too,” Reed said. Scott Lang (Paul Rudd) is a thief who takes over as Ant-Man after Hank Pym, played by Michael Douglas.

It’s unclear what kind of role Cassie will have, but we’re guessing it’s not a major one. Scott Lang’s origin story in the comics focused heavily on Cassie, who at one point was suffering from a rare illness. Out of desperation, Lang stole the Ant-Man costume to break into a medical facility, where he found a scientist who could cure Cassie’s illness.

As far as we’ve been able to glean from the sparse information on the upcoming Ant-Man movie, it looks like this origin story has been reshuffled to focus more on the relationship between Hank Pym, Scott Lang, and Pym’s former protege, Darren Cross. So while it’s good news that Cassie hasn’t been discarded in the same way as Janet Van Dyne, Pym’s wife and an original Avenger, her role may not have the same prominence as it did in the Ant-Man comics.

At the moment, it looks like Ant-Man will be taking the typical superhero movie route of having one female main supporting character (in this case Hank Pym’s daughter Hope Van Dyne, played by Evangeline Lilly) and several men in lead roles. Most of Marvel’s Avengers franchise movies have followed this formula, so it isn’t a big surprise. But thanks to the filmmakers’ decision to remove Janet Van Dyne from the story altogether, sidelining Cassie Lang would not be a popular move. Hopefully her eventual role is more than just a footnote.