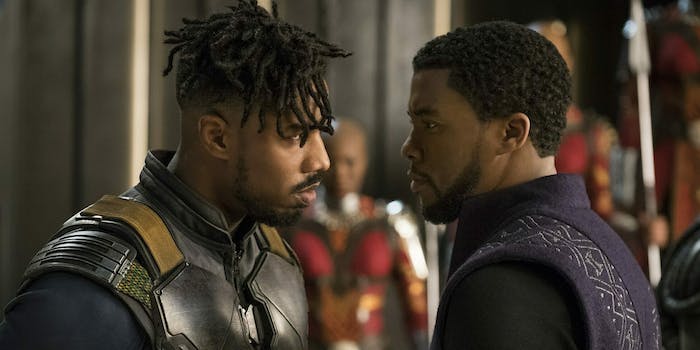 All three of Black Panther’s wins were a welcome surprise, arriving in categories where several rivals could plausibly have won. Costume design usually goes to historical dramas regardless of the competition, and Ludwig Göransson won against a musical, Mary Poppins Returns. Beacher, Carter, and Göransson were also all first-time winners. Here’s a closer look at their achievements.

Carter’s win was, as she put it, a long time coming. At 58 years old, she’s a long-established designer who was previously nominated for her work on Spike Lee’s Malcolm X in 1992. Her big break was another Lee movie, Do the Right Thing, and she gave Lee a shout-out in her acceptance speech.

Carter’s career spans everything from the cult romcom Love & Basketball to Joss Whedon’s sci-fi movie Serenity, with Black Panther as her biggest project to date. She put a ton of research into this film, creating an Afrofuturist aesthetic that was totally new to Hollywood. Drawing from real-life African styles, she created distinctive looks for Wakanda’s various tribes and characters like T’Challa, Shuri, and the Dora Milaje guards.

You may not have known it before last night, but Hannah Beachler is already a star. Before she designed Black Panther, she worked with director Ryan Coogler on Fruitvale Station and Creed and was the production designer for Beyoncé’s Lemonade and 2017 best picture winner Moonlight. Beachler also gave one of the best speeches of the night, giving effusive thanks to Coogler for supporting her throughout her career, and ending on a tearful yet confident note: “I did my best, and my best was good enough.”

Beachler’s win was one of the night’s most inspirational moments—not just because Beachler (like Carter) was the first Black woman to win in her category, but also because it really shines a light on production design. This can sometimes feel like an obscure technical category, but Black Panther’s aesthetic achievement is obvious, and after Beachler’s memorable work on Lemonade, you can easily imagine people watching this speech and truly thinking about production design for the first time.

This was another strong category, with Black Panther going up against a big-name musical (Mary Poppins Returns) and one of the most celebrated scores of the year (If Beale Street Could Talk). Plus, the MCU franchise doesn’t really have a reputation for attention-grabbing music in the same way as the classic Batman or Superman movies. Göransson’s work, however, definitely earned that Oscar. Check out his main Wakanda theme, featuring Senegalese singer Baaba Maal:

Another of Ryan Coogler’s longtime collaborators, Göransson combined an epic Hollywood orchestral score with traditional African music and instruments, following an intensive research trip to Senegal and the International Library of African Music in South Africa. He created the sound of Wakanda, joining forces with an extensive concept album of Black Panther-inspired tracks curated by Kendrick Lamar.