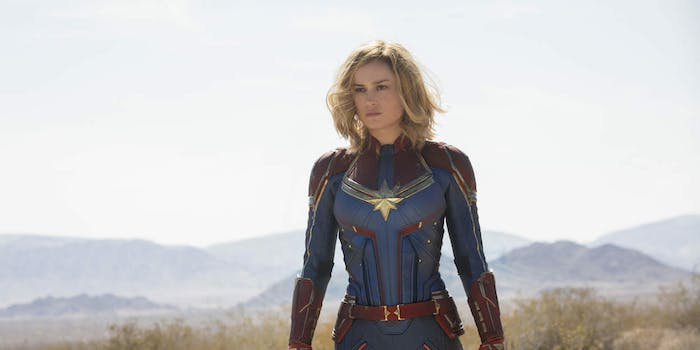 Ticket pre-sales project that 'Captain Marvel' will be one of the most popular Marvel movies ever.

With two weeks to go before its U.S. release date, Captain Marvel is already a box office hit. According to pre-sale stats from Fandango, the upcoming Marvel spinoff is more popular than DC’s recent origin stories Aquaman and Wonder Woman.

Captain Marvel is also outstripping most other MCU movies, coming third on Fandango’s list of Marvel bestsellers after Black Panther and Avengers: Infinity War. That’s pretty damn impressive because superhero sequels tend to do better at the box office than origin stories. Not to mention the fact that Captain Marvel is, to mainstream audiences, a relatively obscure character.

The movie is projected to make at least $100 million on opening weekend. Obviously, that’s helped along by a massive marketing push from Disney, but the popularity of Captain Marvel, Wonder Woman and Black Panther still goes against long-held (and very inaccurate) assumptions about what audiences supposedly want.

Although white, male characters dominated the superhero genre for years, it seems that people were crying out for more diverse casting. Captain Marvel’s marketing campaign has leaned heavily on her role as a feminist hero, appealing to girls and women as a strong female lead.