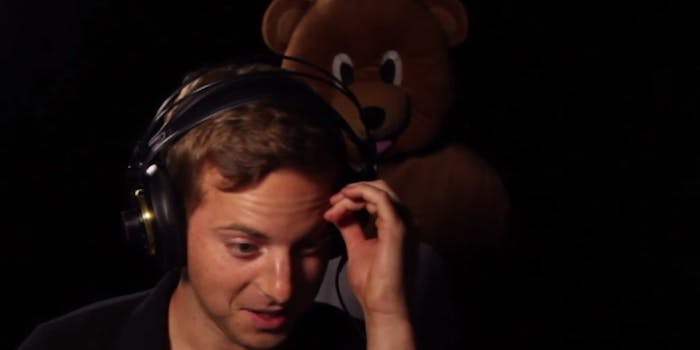 Five Nights at Freddy’s nightmares come alive in this video

When BuzzFeed does a Let's Play on the scariest game of the year, you know things are going to get creepy.

BuzzFeed has discovered Five Nights at Freddy’s, the new indie horror game that sticks its players in a locked room with giant and steadily advancing animatronic animals who want to murder them and stuff them in bunny suits of their own.

The game, fueled by strong word-of-mouth and a number of prominent Let’s Play YouTubers who declared it the scariest game they’d seen recently, has become a viral phenomenon. There’s a large fandom for the creepy, insomniac toys who inhabit Freddy’s pizzaria—a demented homage to children’s restaurants like Showbiz and Chuck E. Cheese.

So naturally, when BuzzFeed set out to film player reactions to the game, it didn’t just do a Let’s Play video.

No, it put the players in a room, alone, and turned out all the lights.

Then, at 1:20, it sics a giant human in a cartoon bear suit on them, as if their nightmares weren’t already real enough.

There’s already a planned sequel to Five Nights at Freddy’s, due out in early 2015. Meanwhile, you can download the first Freddy’s through Steam or Desura and enjoy the terror yourself. Just don’t get any ideas for Halloween—we’re not sure we could survive seeing these guys roaming the streets.