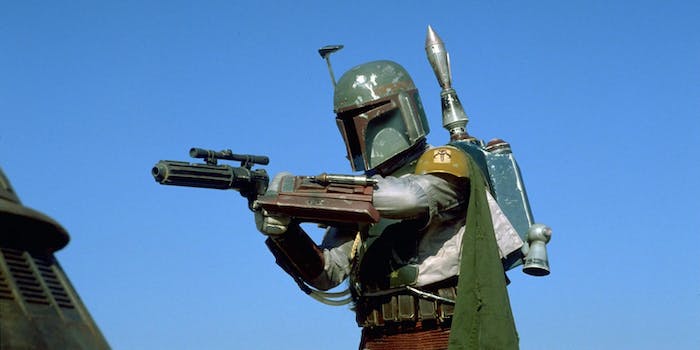 This news is earning a mixed response from fans.

Disney is going ahead with its Boba Fett movie idea, with Logan writer/director James Mangold at the helm. This confirms a long-running rumor that Boba Fett would get the next Star Wars spinoff after Solo, with Billy Elliot director Stephen Daldry reputedly in talks to direct an Obi-Wan movie as well.

This news has already inspired a distinctly mixed response. On the one hand, Boba Fett gained a cult following after his minor role in the Original Trilogy. He’s basically famous because kids in the 1980s loved his jetpack, spawning a plethora of toys and tie-in stories. His costume is a mainstay at fan conventions.

A Boba Fett movie also offers a rare chance for a Māori actor to lead a massive blockbuster because the character is a clone of Jango Fett, played by Temuera Morrison in Attack of the Clones. Later editions of the Original Trilogy switched Morrison’s New Zealand accent for Fett’s original voice, making him a more distinctive character. So unless Disney makes a seriously bad decision, Boba Fett will be the first Star Wars movie with a person of color as the lead hero.

On the other hand, Boba Fett is a conceptually boring choice for a spinoff. His original role is much smaller than you may remember, appearing as one of several bounty hunters hired by Darth Vader in The Empire Strikes Back. In Return of the Jedi, his main job is to get thrown into the Sarlacc Pit and die. That’s not an intrinsically interesting basis for a spinoff movie.

This leads to a question we already asked about Solo: Does this movie need to exist? Assuming that Star Wars releases one or two movies a year from now on, is Boba Fett a worthwhile choice for one of those slots? It’s essentially the equivalent of making a movie about an action figure. That’s fine for G.I. Joe but depressingly unimaginative for Star Wars, which has a massive library of characters with more enticing backstories to explore.

As an antihero who thrives in the criminal underworld, Boba Fett is a conservative choice for an action franchise. Star Wars could make a teen movie about the Jedi Temple or a fantasy epic about the Knights of the Old Republic, or a political thriller about the handmaidens of Naboo. Instead, Disney went for the jetpack crime dude. And they hired yet another white male director to do it.

Obviously, these conflicting opinions all come from a place of total ignorance about the eventual movie. Disney hasn’t commented on what the story will be. All we really know is that James Mangold is in charge. Geeks know him for directing Logan, but his career actually spans a wide range of genres. He previously directed Walk the Line and Kate & Leopold, so maybe Boba Fett will be a romcom. Hell, maybe they’ll confirm the lesbian Boba Fett fan theory. We won’t know until we know. But in terms of backstory and overall potential, Disney could’ve done better.