Surprised? Don't be. This is just another day in fandom.

What can an elaborate fan theory teach us about Internet culture? Plenty, when that theory is about Star Wars cult idol Boba Fett.

It all started when Tumblr user sashayed remarked in passing, “Is there any reason to believe Boba Fett isn’t a lesbian?”

First came the outpouring of outraged backlash to the idea of lesbian Boba Fett, which prompted more piqued responses, analysis of the new fan theory, wiki defacing, the lesbian Boba Fett playlist, and general hilarity. Eventually, sashayed broke down the phenomenon in a hilarious “get off my lawn” response to the outrage.

Then fandom icon, comics artist, and recent National Book Award nominee Noelle Stevenson stepped in. Stevenson delivered a deadpan and entirely canonical hypothesis that Boba Fett could actually be a lesbian. It’s a brilliant reading involving clones, backstory, faked deaths, and a dizzying amount of Star Wars geekery. The gist of it is that Jango Fett (Boba Fett’s father) faked his badass friend Zam’s death in order to pass her off as a clone of his (clone) son after they escaped Obi-Wan in Attack of the Clones:

I posit that the real Jango, Boba, and Zam were halfway across the galaxy perhaps before Obi-Wan even showed up on Kamino. Zam could’ve become anyone with a snap of her fingers. Jango and Boba are protected by the fact that they have flooded the galaxy’s gene pool with hundreds of thousands of identical replicas of themselves. They could be anywhere.

Fast-forward to the original trilogy, where we meet Boba Fett as we know him. Who is he? Is he the real Boba Fett, the one perfect clone of Jango Fett? Is he the clone of the clone who only thinks he’s the one perfect clone of Jango Fett? Or is he someone else entirely? Jango’s Mandalorian armor could have fallen into the hands of anyone at any time. Even the name “Boba Fett” could be easily adopted as soon as the previous Boba Fett was dead, his armor up for grabs. A Dread Pirate Roberts of space, perhaps. We just don’t know!

But “Boba Fett is a Lesbian 2k16” is more than just a great fan theory and the first major fandom meme of 2016. It’s even more than fandom clamoring for more diversity and representation in media: It’s a case study of female-dominated fandom culture asserting itself, on a routinized and basic level, against the norm.

It’s useful to think of fandom in this context as a kind of trash compactor where old and outdated ideas go to die or be recycled.

Picture denizens of various fandoms regularly receiving, assessing, and analyzing standard ideas and Hollywood tropes. Fans recycle these tropes in a kind of “garbage in, new ideas out” process that’s so routinized most of us don’t even question it. But the Lesbian Boba Fett theory is a great opportunity to break down what’s so cool about the way fandom thinks.

One of the things fandom culture is best at is subverting the accepted wisdom of narratives and the pieces that go into them. There’s no better illustration of this than Stevenson’s assessment of Boba Fett’s fashion choices:

And this is how Boba Fett dresses in the original trilogy: 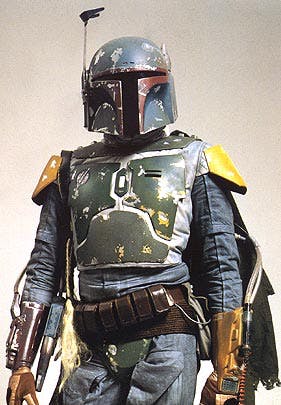 What’s the best part: the cape? The braided Wookiee pelts displayed on the shoulder that serve no clear purpose? Boba Fett clearly displays an aesthetic sense MUCH MORE along the lines of Zam Wesell than Jango Fett. That’s right, everyone, Zam Wesell is Boba Fett, and she absolutely ruined Jango’s armor.

Stevenson neatly dismantles one of the core parts of Boba Fett’s narrative: the idea that his costume is a manly man’s. She uses her reinterpretation of his baubles and flashy cape to bolster her theory that Zam is Lesbian Boba Fett—but she’s also poking holes in the idea that Star Wars is a dudefest that only appeals to other dudes. She’s not adding anything new into the narrative; she’s just reframing what’s there based on that most subversive of all viewpoints: the girly one.

At another point in Stevenson’s analysis, she notes as an aside that Jango Fett could actually be asexual. Stevenson uses a scan from the 2002 Star Wars: Jango Fett comic in which Jango demonstrates a distinct lack of interest in a Coruscant sex worker: 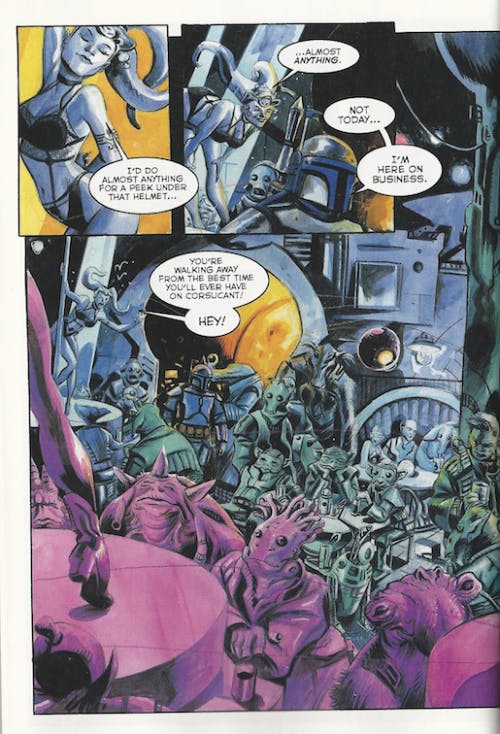 This is a long-familiar trope handed down to us in everything from Westerns to film noir: The lone outsider walks through the bar, shrugging off tawdry sexual temptation in favor of focusing on the business at hand. It’s a miniature of what TV Tropes calls the Celibate Hero. This character type is always male, and he never allows himself to get distracted.

But what if that’s not what’s going on here? What if Jango Fett is, pure and simply, not interested in women, or indeed in anyone, because he’s ace?

This is a pretty basic idea. But to think this way, it helps to actively think about media. When we just watch or read a book without “talking back” to them, so to speak, we tend not to think too hard about tropes. And that allows the tropes themselves to grow stale and perpetuate really old ideas—like the idea that Jango Fett turning down a sex worker is a sign of his superior strong will and masculinity. But when you’re engaged in a community where active media consumption is encouraged, it’s a lot easier to see past this kind of trope.

So what kind of community encourages you to actively think about narratives and stories? Often, it’s the kind of community full of marginalized people whose identities usually aren’t a part of these tropes—or, if they are, they’re on the outside. For example, there’s no equivalent Cool Character version of the trope where a sex worker who’s had a long day rejects a john who’s throwing himself at her. That’s not how this works—the sex worker’s story is usually not the one being told.

In fandom, we’re constantly actively consuming and re-assessing the way we think about media so we can make room for all those other stories around and inside the story that’s presented to us. It might be easy to assume that Lesbian Boba Fett is just about going, “Hey, how can we make these characters gay?”

But really, Lesbian Boba Fett is about that constant process of re-examining old tropes with new eyes. When that happens, we make those tropes more durable and more meaningful to more people.