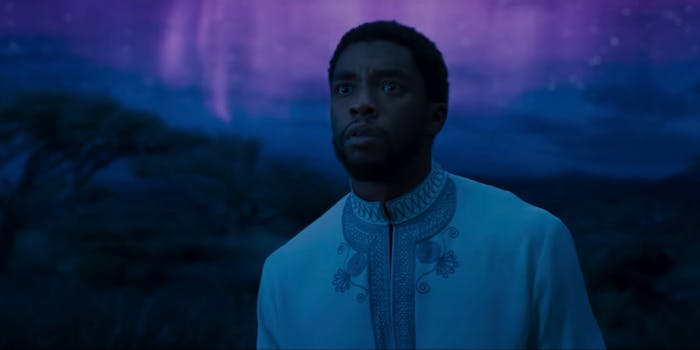 Black Panther may be the 18th film in the Marvel Cinematic Universe, but it’s largely its own movie with very few connections to the rest of the MCU. Indeed, it was noticeably lacking of one of the universe’s powerful gems—and according to the director, that was intentional.

With Avengers: Infinity War coming out in just a few months, some fans expected that we would find the final Infinity Stone—the orange Soul Stone—somewhere in Black Panther’s Wakanda. While the film featured plenty of advanced technology and super powers as T’Challa fought to take the throne back from Killmonger, there wasn’t an indication that the Soul Stone was involved in any of it. It’s not that stone is hidden so well that it takes several rewatches to find; it’s simply not there at all.

In an interview with IGN, director Ryan Coogler confirmed that the Infinity Stones don’t feature in Black Panther. He pointed to Wakanda’s abundance of Vibranium—the rare metal is infused into much of Wakandan tech and was used to make Captain America’s shield—as already being part of the movie. Coogler felt like he didn’t need to add yet another item to the mix.

“I love the Infinity Stones as much as any comic book fan, it’s just Wakanda already has its thing, which is Vibranium,” Coogler said. “For us, that was special enough, so to throw in something like another special thing didn’t feel right. It felt like we should stick with our one MacGuffin for the country and explore that, let that be the important thing because, frankly we didn’t need to have another piece like that.”

It wasn’t something he went rogue and decided on his own, either: “[Marvel Studios] never really was interested in putting a stone in there, either,” Coogler added.

Black Panther, like Thor: Ragnarok before it, worked by focusing on its own world and themes instead of overly relying on the Infinity Stones, but it still had enough to tie it into the larger story that will continue with Avengers: Infinity War. And given what we’ve seen of Infinity War, there will be more than enough Infinity Stone action to make up for the lack of the stones in Black Panther. After all, there’s an empty gauntlet, and someone’s gotta fill it with Infinity Stones.