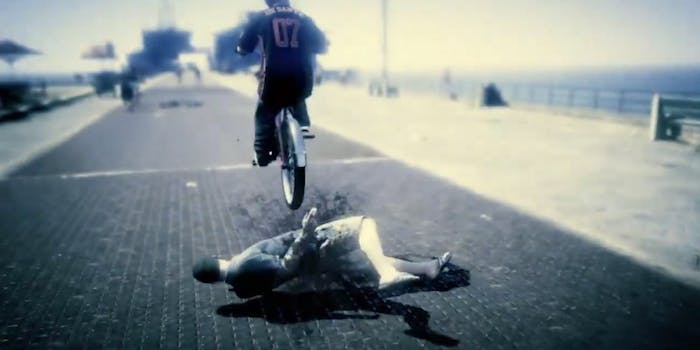 Turns out bicycles are horrifying and deadly—in GTA V

A 10-speed can kill you just as quick as a sports car.

There are so many ways to die that involve bicycles in GTA V, and we thought we’d seen them all. Not so much, it turns out.

Most of the best Grand Theft Auto videos are coming out of GTA Online, which is a sandbox for virtual manmade disasters whose scale is limited only by the depravity of the players. This video in which bank robber Michael De Santa challenges his son Jimmy to a bike race, however coughs up a nice bit of crazy from GTA V’s story mode.

You need a twisted sense of humor to enjoy some of GTA’s finer moments. Rockstar Games enjoys prodding that dark mirth with crazy in-game events for GTA Online, like dropping a foot of snow on a fictional version of California.

San Andreas is going to have a white Christmas in the GTA Online Festive Surprise, which will include death by snowball. There will definitely be some videos of snowball fights littered with mortal woundings for us to enjoy.