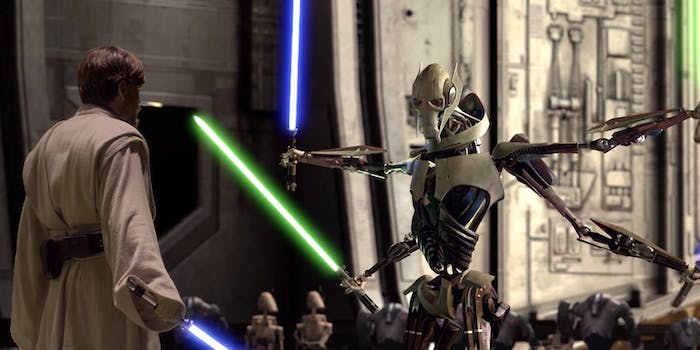 Revenge of the Sith/Star Wars

The release of Star Wars: Rise of Skywalker has Star Wars on many people’s minds.

The movie has been out for just over two weeks, and most conversations are still dominated by talk of Jedi, Sith Lords and the force. Over the past several weeks, the hype has shifted from Twitter and Instagram to TikTok, where users are basking in the nostalgia of one of cinema’s greatest franchises. TikTok’s Star Wars meme game is strong, and people are noticing.

One of the memes finding new life on TikTok relates to a number of Star Wars Lego games. The games, which have been popular among fans since the first was released in 2005, have a dedicated fan following. Their blend of fun, childish themes with the gripping storylines from Star Wars created a generation of ardent fans. Those fans are now sharing their love through TikTok, where users are changing their profile pictures to characters from the beloved video games.

The trend is getting attention from people on and off of TikTok. “My little sister got 300 new followers on TikTok after changing her profile picture to a Lego Star Wars character,” one user wrote on Twitter.

The trend has gotten so popular that people are even talking about bringing it to other social media sites. “I say we bring the Lego Star Wars profile pictures from TikTok to Twitter,” one user wrote.

my little sister got 300 new followers on tiktok after changing her profile picture to a lego star wars character????

i say we bring the lego starwars profile pictures from tiktok to twitter. unless if that’s already a thing.

The meme is nearly universal on TikTok, as users from all walks of life jump on the trend. By the end of the week, it may be impossible to find a TikTok user with a non-Lego Star Wars profile picture.

Another meme to spawn from TikTok’s new Star Wars obsession reaches all the way back to 2005’s Star Wars: Revenge of the Sith. In one of the film’s scenes, Obi-Wan Kenobi jumps down behind the Separatist Army’s General Grievous and utters a simple, almost surprised “hello there.”

The scene inspired a new batch of TikTok memes, typically featuring people reenacting the scene. The memes are particularly amusing as, in order to properly imitate the many-armed—and multi-lightsaber wielding—Grievous, at least two people are required. The videos of people balanced atop one another’s shoulders, flailing their lightsabers, quickly took the platform by storm.

Revenge of the Sith was behind several of TikTok’s current memes. Another scene, toward the end of the film, is also getting the TikTok meme treatment. Just before Obi-Wan and Anakin finally duke it out, they exchange words. A scene that was intended to be heartbreaking is instead often the target of mockery, as Anakin finally falls, completely and utterly, to the Dark Side. Obi-Wan’s genuine anguish at his loss was lost on many viewers, who instead poked fun at the dramatic scene.

TikTok users are rehashing the scene, but with far less contempt than it usually receives. Videos of users reenacting the scene, and in some cases merely appreciating the drama, are all over TikTok. “Real men cried at this part,” one user captioned their video.