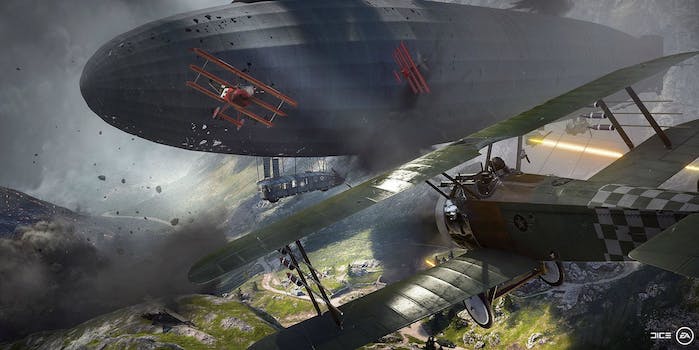 Does it even matter anymore where and when a Battlefield game is set?

Soldiers dying in the blood and muck between nearly immobile trench lines does not sound much like a Battlefield game.

But that’s exactly what came to mind when Electronic Arts announced its upcoming Battlefield 1 would be set in World War I. Players got an opportunity to spend time with an alpha test version of Battlefield 1 at E3 last week in 64-player matches of Conquest mode, where teams fought over multiple objectives on a huge map with an array of land and air vehicles to commandeer.

Conquest mode is what defines the Battlefield series, and I expected it to feel very strange in a World War I setting. The horrors of trench warfare are the lasting symbols of how the birth of modern war between 1914 and 1918 shocked the world. While there were theaters during the war defined more by mobility than by static defenses, the trench lines of France are how World War I is popularly recognized in United States lore and literature.

Thus it came as a surprise to me when World War I was revealed as the setting for Battlefield 1. Even so, Battlefield 1 felt no less authentic to the franchise than any other Battlefield game I’ve played.

My Battlefield 1 demo actually got some things right that other recent Battlefield games have gotten wrong. 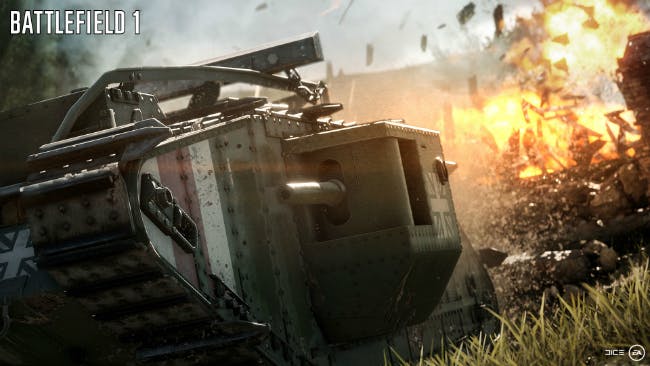 Battlefield developer DICE has for years been selling the appeal of the franchise in part by your ability to destroy the environment, like knocking down trees and blowing holes through walls, to change the battlefield itself and alter the tactical situation to your advantage.

Yet this hasn’t felt like a serious component of Battlefield play since Battlefield: Bad Company 2, released in 2010. My team during a match of BFBC2 would often get sick of our opponents hiding, say “Let’s make the map look like the moon,” and proceed to spend several minutes not killing other players but instead concertedly blowing up all the buildings until small towns became little more than fields of rubble. At which point no one had any place to hide, which suited us just fine.

During my Battlefield 1 demo there was a sniper who killed me three times while I was trying to capture a flag. He was hiding in a windmill that loomed high above the rest of the map. I suppose I kept expecting that someone else would kill him, so I’d eventually be safe to capture the flag.

I decided after my third death that I didn’t care about the flag anymore. Killing the sniper had become my number one priority. I also decided that the windmill he was hiding in would therefore no longer be allowed to exist.

It only took two shots from my “AT rocket gun”—a heavy, single-round weapon that I had to deploy a bipod to use and manually reloaded—to destroy most of the upper floor of the windmill.

Anti-tank weapons of this sort did actually exist during World War I, used by the German army against British and French tanks. I don’t know whether the Germans also used them to destroy enemy cover but my AT rocket gun was certainly effective in making the sniper I was hunting come running out of the windmill to seek new cover whereupon I gunned him down.

Anyone familiar with either World War II movies or video games will instantly recognize the German Stielhandgranate or “potato masher” grenade, a cylindrical explosive on top of a wooden stick that makes for an excellent thrown weapon. The anti-tank grenade in Battlefield 1 is a bundle of six Stielhandgranate wrapped around a stick.

Not all of the improvised anti-tank grenades used by the Germans in World War I used precisely six warheads, but the idea for this weapon in Battlefield 1 is not entirely inaccurate historically speaking.

I mused on this when, during the demo, I saw tracer fire lancing through an archway set into a concrete wall around a small townhouse. I equipped my anti-tank grenade, threw it over the wall, and proceeded to not only kill the player on the other side but also to destroy the wall he’d been hiding behind.

Later in the demo, using the AT rocket gun, I destroyed a machine gun position hidden in a window on the second floor of a house because it was pissing me off, and that’s around the time I officially felt like I was playing a proper Battlefield game.

In retrospect a Battlefield game set during World War I shouldn’t feel odd because it represents the franchise going full circle. You might think that Battlefield 1942, released in 2002, the first game in the Battlefield series pioneered online, combined arms multiplayer shooter games, but it didn’t.

Codename Eagle, released for PC in 1999 took place in an alternate-history version of World War I. Battles were fought on large maps where players could fight on foot as in traditional FPS games at the time, and could also man gun emplacements, fly biplanes, and ride in ground vehicles in online multiplayer deathmatches.

DICE then took the idea of Codename Eagle, set it instead in World War II, spiffed up the graphics, and released Battlefield 1942 to commercial and critical success. So from this perspective setting Battlefield 1 in World War I makes all the sense in the world, because that’s where all of this started.

Once I’d played 90 minutes of Battlefield 1 and began taking the game seriously, I decided to question my assumptions about the war. I knew in fact that viewing World War I merely as an exercise in trench warfare was ignorant. Aerial battles and the use of tanks were introduced in World War I, and these elements working in concert with infantry is a textbook definition of combined arms warfare, the bailiwick of the Battlefield series. 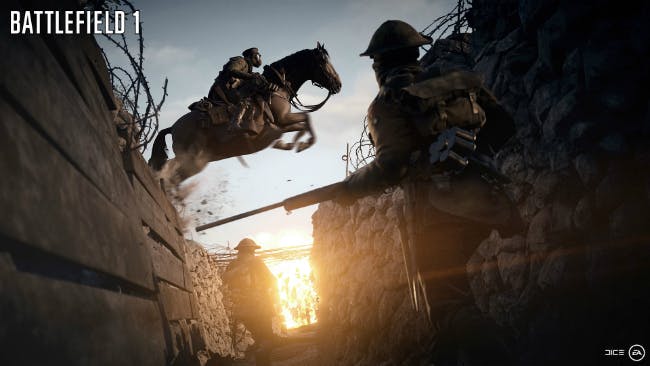 That’s not to say that Battlefield 1 is historically accurate. The Conquest matches we played had a huge German zeppelin hovering over the battlefield and pounding the ground with accurate cannon fire. Armed zeppelins in World War I primarily dropped bombs and went on scouting missions.

But then asking for realism in a Battlefield game doesn’t make sense either.

Die-hard Battlefield fans would probably be just as excited if the next Battlefield game were to take place during the American Revolution as they were by the reveal that Battlefield 1 was taking place during World War I. Who cares about the setting as long as players still have the ability to blow lots of shit up while fighting the Redcoats.

The single-player campaign for Battlefield 1 might be where the indefensible ridiculousness lies. I’m still not sure about that guy from the trailer with the suit of armor who’s standing there shooting a machine gun.

Battlefield 1 will be released for PC, PlayStation 4, and Xbox One on Oct. 21.