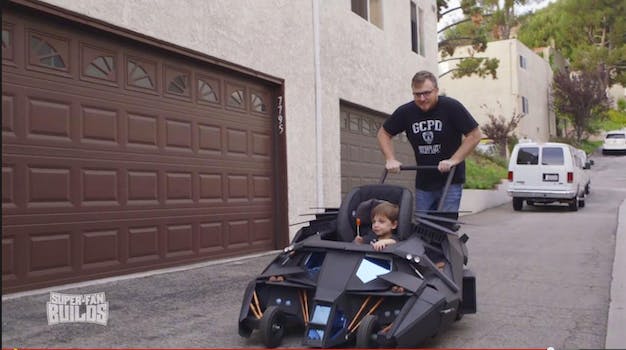 Because he's the toddler Gotham deserves, but not the one it needs right now.

Batkid better watch his back, because Gotham has a new pint-sized savior in town and he’s got the wheels to prove that he means business.

Meet Josh Earl and his adorable son Collin. This Dark Knight–loving duo don’t have your typical father-son relationship. While the rest of their peers are off playing catch in the front yard or tossing a line in at a local fishing hole, these two are in Josh’s basement geeking out over his expansive collection of Batman memorabilia.

So to bring the Bruce Wayne-loving boys closer together, wife and mother Mareesa reached out to the crew at Super-Fan Builds to ask if they could construct something Batman related that both father and son could enjoy.

The response was nothing short of epic. Tim Baker and his crew at Tim Baker Creations took to the drawing board and concocted a plan to build the ultimate Batmobile stroller for Collin to cruise around in. Modeled after the Tumbler Batmobile from Christopher Nolan’s Dark Knight trilogy, this beast of a stroller will surely intimidate any toddlers on the playground the next time it rolls up.