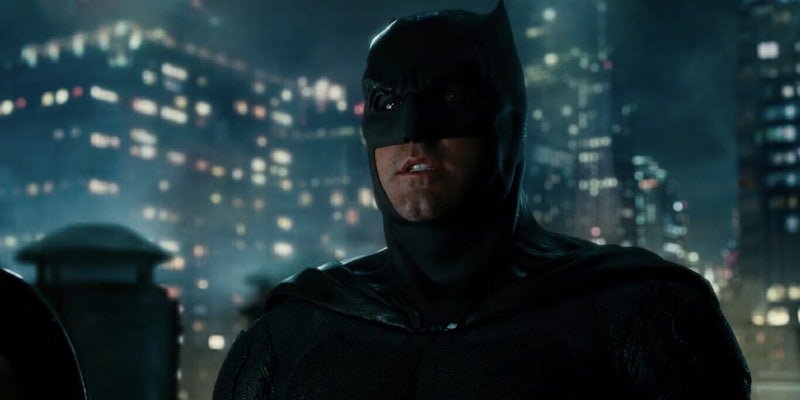 ‘The Batman’ will happen without Ben Affleck—and fans have feelings

Warner Bros. is shaking up the franchise.

After years of confusing news about who will direct and star in Warner Bros.’ upcoming Batman movie, what the story will be about, and when it will be released, we now have more definitive answers—to these questions at least. Director Matt Reeves has confirmed that The Batman is set for a June 25, 2021 release, featuring a much younger Bruce Wayne, according to Deadline.

We also know who will not be in it: Ben Affleck is reportedly not returning as the Dark Knight, which he portrayed in 2016’s Batman v. Superman: Dawn of Justice and 2017’s Justice League, with a cameo in 2016’s Suicide Squad. Affleck stepped down from his role as The Batman director and writer in 2017 and was replaced by Reeves shortly after.

As if to confirm the report that he’ll no longer be part of the project, Affleck tweeted a link to Deadline’s report, saying he’s “excited” to see Reeves’ vision come to life:

Excited for #TheBatman in Summer 2021 and to see @MattReevesLA vision come to life. https://t.co/GNgyJroMIO

While his being cast as Batman in the first place proved to be polarizing among fans, many were still disappointed to see him depart the franchise. “Thank you @BenAffleck for being Batman, … @ZackSnyder is a legend for casting you while the internet hated it. You proved them wrong and you have that title. Thank you and best of luck,” user @jaeroar tweeted.

Writing has been on the wall for a while with Ben Affleck and Batman. But even still, finally getting the confirmation still feels like a gut punch

His role in Batman v Superman, Suicide Squad was the closest to comic book Batman we’ve seen. Kinda missed out on something special

Say what you will about Ben as Batman, but its scenes like this that made me love his portrayal.

This is Batman to me. I really will miss it. pic.twitter.com/SES1OAJNgY

Would've loved to have seen more of this from Batfleck.

This was one first times watching a Batman film where I was like "Now that's how Batman kicks ass!" #TheBatman @BenAffleck pic.twitter.com/vA3EfXcLFs

You lost Zack Snyder to Netflix, You got rid of the perfect batman and you gave us sneaky bastards, paedophile joke man and we still see snake hats name on everything. You’ve officially pissed off 99% of your hardcore fans, take a bow @wbpictures @WBHomeEnt you are disgusting!! pic.twitter.com/hXvdazlzhq

Ben was the best Batman and deserved a trilogy. And I already know none of my second choices will be cast. They're gonna pick whichever actor will disappoint me the most. Calling it. #TheBatman pic.twitter.com/laYEDx6x4V

you tried your best with those terrible scripts my g, thanks for everything pic.twitter.com/gQuJXrvKX1

As for which DC Comics storyline the new movie will pursue, Reeves confirmed that it will be “a point of view-driven, noir Batman tale,” reiterating what he said during the Television Critics Association panel last year.

“It’s told very squarely on his shoulders, and I hope it’s going to be a story that will be thrilling but also emotional. It’s more Batman in his detective mode than we’ve seen in the films. The comics have a history of that. He’s supposed to be the world’s greatest detective, and that’s not necessarily been a part of what the movies have been. I’d love this to be one where when we go on that journey of tracking down the criminals and trying to solve a crime, it’s going to allow his character to have an arc so that he can go through a transformation,” he tells the Hollywood Reporter.

The Batman won’t necessarily be connected to any other movie in the DC universe, too, with Warner Bros.’ apparent new direction of focusing on standalone films instead of having them exist in one shared universe Marvel-style. “Right now, I’m involved in The Batman. What it will be called ultimately, I don’t know. Aquaman is going to be very different from the Todd Phillips Joker movie, and that’s going to be different from Shazam and Harley Quinn. Warner believes they don’t have to try to develop a giant slate that has to have all the plans for how it’s going to connect. What they need to try and do is make good movies with these characters,” he says in his interview with THR.

Reeves has yet to announce who will play the new Caped Crusader, but says he will have several villains—“a Rogues Gallery.” (Comicbook.com listed a few guesses for the roster.) He has yet to pick the cast. According to Variety’s sources, “studio execs have been very happy with early versions of Reeves’ draft and that he had been spending the past couple of months giving a final polish before he began meeting actors for the part.” Reports indicate filming will supposedly begin in November.

Still, fans are eager to throw in suggestions for who should wear the Batsuit—everyone from Robbie Amell (CW’s The Flash) to Richard Madden (Bodyguard and Game of Thrones).

So I hear you're looking for the next Batman. pic.twitter.com/Rvgs4cOHjd

Since @mattreevesLA is looking for a younger Batman, I think they should give @RobbieAmell a test shot pic.twitter.com/EbIUVYHkJn

Ben Affleck confirmed that he will not be Batman anymore and will have to hire a new actor for the role. Let me save everyone's time and solve this: pic.twitter.com/5fnwbSHfjb

A Black Batman should definitely be considered, especially according to user @its_all_groovy:

My choices for who should replace Ben Affleck as Batman pic.twitter.com/YHvo4FE0dg

However, some are of the opinion that no one should play Batman for a while:

I know this is crazy but hear me out: what if, for a little while, no one played Batman

Hey instead of a young batman movie

just… have a world where Batman's gone pic.twitter.com/CGkONixEKy

The Daily Dot made a strong case for it here. We’ll have to wait until 2021 for The Batman to see if it’s worth bringing him out of the Batcave.