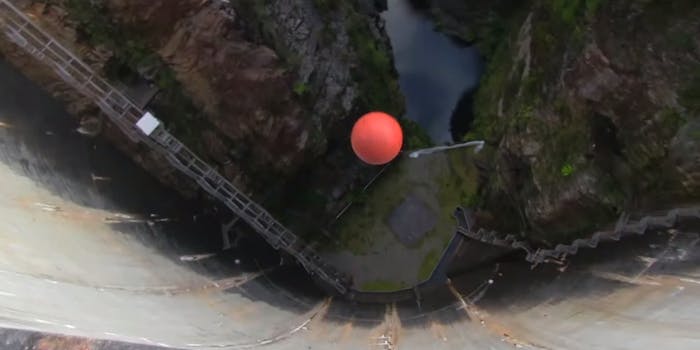 Science explains why this basketball appears to fly

Typically when we think of backspin, we think of trick shots in basketball and advanced moves in tennis. But there is more to backspin than meets the eye.

In this week’s Veritasium video, host Derek Muller discusses an experiment by his friends at How Ridiculous in which they drop a basketball off the top of the Gordon dam in Tasmania.

Simply dropped, the ball falls more or less straight to the ground. But with a little backspin, it falls and then it suddenly flies forward. It sails over the water below before finally touching down and bouncing across the water like a skipping stone.

Muller says this is the result of the “Magnus effect” which most normal humans know as “backspin.” The reason it looks so spectacular in this video is mainly due to the sheer amount of space the ball had to move through the air. The dam is 415-feet tall, roughly the height of a 33-story building or a little over the length of nine school buses.

The effect occurs when any sphere or cylinder is propelled through the air with that bit of backspin. Muller explains that as the ball spins through the air, the air on one side of the ball goes in the same direction as the spin and is deflected behind the ball. On the other side, the air is flowing opposite to the spin and is deflected away. So the air that is spinning with the ball applies an opposite force, propelling the ball.

The Magnus effect also has more applications than just sports, Muller said, such as propellers for boats and aircraft. In fact, one type of boat already uses giant spinning cylinders to cut down how much diesel it uses, Muller said. It’s sort of like a boat hybrid.