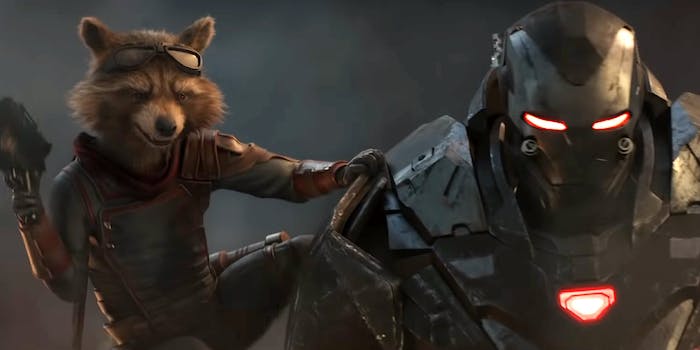 Say it ain't so, Rocket.

Avengers: Endgame, which clocks in at three hours, arrives in theaters next month with lots of secrets. Half the fun is the guessing game of who lives, dies, and defeats Thanos. But Sergio Zurita, who voices Rocket Raccoon in the film’s Spanish dub, just dropped a major spoiler that we all knew deep down. (Please stop reading if you would prefer to avoid the spoiler.)

As BGR reports via Spanish-language blog Unocero, Zurita spoke with MVS Noticias’ Dispara Margot, Dispara radio show on Monday and got candid. He said the film is hilarious and moving but that it’s also heartbreaking because a major character dies.

“I can tell you that the movie takes you from laughter to tears. A key character dies. … I can not say more… it’s too much. I do not know if I already said too much,” Zurita reportedly said.

Zurita also said that Thor creates some “irreversible” consequences during Endgame. As Unocero notes, voice actors who do international translations don’t usually get the entire script and are limited to their parts. Thor and Rocket Raccoon have had several interactions during their on-screen Marvels runs—could he be implying that Thor doesn’t make it out of Endgame and perhaps sacrifices himself to reverse time and save the other Avengers?

Most fans take it for granted that team captains Iron Man and/or Captain America will die in the movie. Both are played by actors—Robert Downey Jr. and Chris Evans, respectively—who are at the end of their Marvel tenures. As the Dot wrote in a roundup of fan theories: “Robert Downey Jr. hasn’t publicly signed onto any future Marvel movies. Surprises are possible, but Downey is the man who kickstarted this universe. It only makes sense that the actor and character needed an exit plan.”

Then again, maybe Ant-Man will crawl inside Thanos’ butt and expand—rescuing the team and saving everyone—as fans have speculated via memes.

In the meantime, Zurita seems to be taking his spoiler-dropping in stride and is enjoying some quality time with his dog.