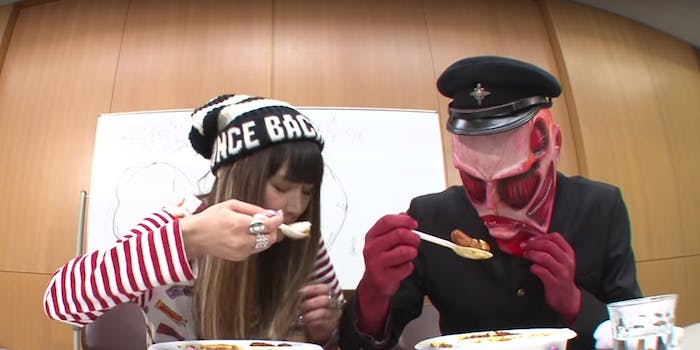 The idea of a child-friendly Attack on Titan spinoff is already pretty bizarre, especially when you factor in Attack on Titan: Junior High‘s tween-sitcom setting. The addition of live-action scenes just compounds the weirdness.

This new video features the Attack on Titan voice cast in a live-action treasure-hunt segment, set in a middle school, co-starring a man in a titan costume. We’ll give you a moment to digest this concept, because it’s about as far from the grim wartime setting of Attack on Titan as you could possibly imagine.

Basically, what we’re looking at here is a Japanese Nickelodeon-style kids TV show based on an adult-rated manga about man-eating giants and the end of the world. You’ve got to admire the creators’ ability to milk this franchise for everything it’s got.