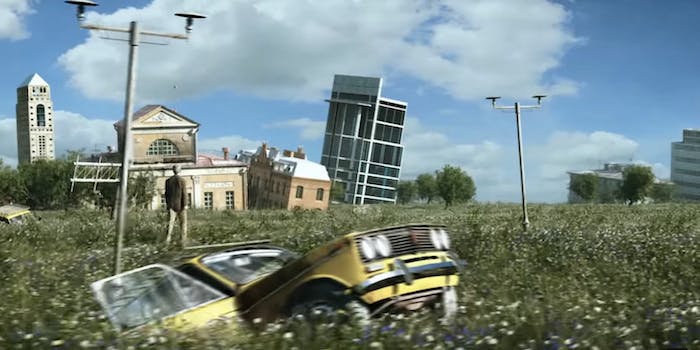 To say that there’s a lot going on in this trailer for Atomic Heart would be an understatement. Echoing the creepy Soviet vibes of games like Metro: Last Light and robotic masochism of Nier Automata, Atomic Heart is a first-person shooter set in an alternate universe Soviet union, complete with killer machines, funky-looking weaponry, and at least one psychotic circus clown.

Take a look at the seriously weird trailer below:

You play as a secret agent of the Soviet government sent to investigate Facility 3826 after radio contact with them is lost. Like most secret shadow government operations, you’ll find that not everything has gone according to plan, and the base is filled with the corpses of former employees and killer robots big and small.

Beyond the setup, there’s plenty of insanely gorgeous and outright bonkers visual imagery to digest, including a fluctuating sea of grass filled with debris and buildings, an army of robots that look like they’d fit right in with the cast of Nier: Automata, and what looks like a pretty comprehensive gun customization interface.

There’s no hard release date yet for Atomic Heart, but the game’s Steam page suggests a 2018 release date. Atomic Heart is also planned for release on PlayStation 4 and Xbox One. If you can’t wait to get your fix of Soviet robo-horror, developer Mundfish is also working on Soviet Luna Park VR, which is set to release for the Oculus Rift and HTC Vive later this month. Soviet Luna Park looks like it combines elements of VR shooter galleries with Russian theme park aesthetics—that, plus a boatload of gore and blood. If you’re not up for suffering alone, Mundfish is planning a multiplayer mode along with it. For what it’s worth, judging from both game’s very similar aesthetic, it looks like Soviet Luna Park VR might serve as a prequel or universe tie-in of sorts to Atomic Heart.