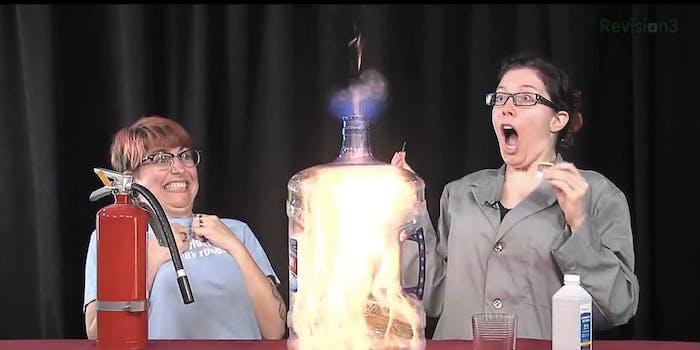 How to start a fire in a jug

All the chemical needs is a little nudge. In this case, the nudge comes from the energy of the match.

Do you like fire, explosions, and strange noises? Yes, the answer is yes. Here’s the video for you:

This common high school science class demonstration is super fun when it is supersized. The instructions are simple: put a small amount of isopropyl alcohol in a large jug with a narrow opening. Cover the top and shake the jug to spread the alcohol around and get the jug full of vapor. Uncover, drop a lit match into the opening and step back.

That sound—I’m going to describe it as “woooooeeooAAAOOW”—happens because of the narrow neck of the bottle. The alcohol catches fire quickly and heats up the gases inside. That sound is the rapidly expanding gas escaping and resonating inside the bottle.

Why does the alcohol catch fire? Time to get geeky, or nerdy, whichever you prefer. Isopropyl alcohol, or C3H7OH, is a colorless liquid, very flammable, and pretty smelly. Chemicals that are flammable easily combust or burn. Combustion is actually a chemical reaction. Remember this from high school?

As any scout worth his or her badges can tell you, that reaction requires fuel and oxygen. Isopropyl alcohol has both: the fuel hides in the carbon-carbon bonds and the oxygen is hanging out as part of the OH group. All the chemical needs is a little nudge. In this case, the nudge comes from the energy of the match.

A second important factor for the demonstration is the ease with which isopropyl alcohol catches fire. The lowest temperature at which a mixture of the chemical and air catches fire is called its flash point. Isopropyl alcohol’s flash point is 55 degrees in a closed cup. If it didn’t have such a low flash point, then the container we use would melt or catch fire itself. A chemical’s flash point is also a measure of its so-called volatility or tendency to vaporize. The smelliness of isopropyl alcohol is also an indicator that it is volatile. When you smell you are actually snorting molecules and getting them to your smell receptors.

Given that low flash point, you can also use isopropyl alcohol to set fire to money (without actually damaging it and by mixing it with water) and as an ingredient in flammable jelly.

Ester Inglis-Arkell has a great demo video (possibly NSFW because of language) of the jug trick up at io9. Here’s a good resource for science teachers hoping to do it in class. For the rest of you, check out the show in slow motion: