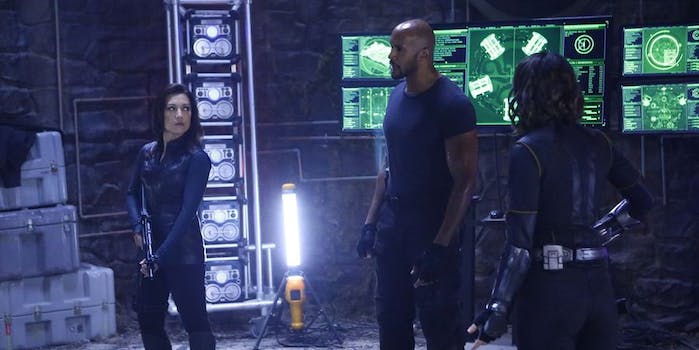 Death finally arrives for a main character in ‘Agents of S.H.I.E.L.D.’

Warning: this article contains spoilers for Agents of S.H.I.E.L.D. season 3.

Few Agents of S.H.I.E.L.D. characters are as controversial as Grant Ward, whose devoted fans have followed him through three seasons of murder, kidnapping, torture, and HYDRA betrayals. But after this week’s momentous mid-season finale, “Maveth,” any hope of a redemption arc has been thoroughly snuffed out.

The villain everyone loves to hate (or loves to love, for the Stand With Ward crowd) is dead—more or less. His ribcage was crushed by Coulson’s robot hand, but his body is still walking around like a zombie Ken doll. Agents of S.H.I.E.L.D. just took an unexpectedly Buffy-esque turn.

“Maveth” offered a typically chaotic scenario for the S.H.I.E.L.D. team to solve: take down a HYDRA base, save Fitz and Coulson from the planet Maveth, prevent the rise of a Cthulhu-esque monster, and rescue a group of kidnapped Inhumans. Mack was there to make the hard choices while Coulson was away, but not even he could deal with all these problems at once.

While other comic book shows present their heroes with a choice between saving innocent civilians or defeating the bad guy, Agents of S.H.I.E.L.D. ties itself in more complicated ethical knots, frequently ending in disaster. As team member Lance Hunter pointed out with commendable self-awareness, the team’s M.O. is to think up a plan, realize that it’s terrible, and then try to figure out a solution at the last moment. In “Maveth,” that meant saving Fitz and Coulson at the expense of letting an alien god invade Earth, wearing Ward’s reanimated corpse as a charmingly chiseled flesh-suit.

The problem with Coulson’s leadership is that he trusts his gut and his gut isn’t remotely trustworthy. After watching other characters repeatedly offer sensible suggestions while he guns ahead without a solid plan, you have to wonder if Coulson does more damage in this show than some of the actual bad guys.

Originally fueled by his desire to resurrect S.H.I.E.L.D. (a decision that still doesn’t feel like an entirely smart idea), he’s been on a rollercoaster of bad decisions for two full seasons. Last week saw the birth of a new obsession: killing Grant Ward, which for some reason hadn’t been a priority until Ward murdered Coulson’s girlfriend Rosalind Price.

Since S.H.I.E.L.D. rarely has any compunction about killing its enemies, assassinating Ward seems like a no-brainer. Unfortunately for them, he’s a compelling character who has been in the show since the pilot episode. Ward—or at least, actor Brett Dalton—isn’t going anywhere, even after being shot twice and abandoned on an alien planet. Instead he’s ascended to a higher plane of supervillainhood, becoming the earthly host of HYDRA’s bloodthirsty alien god. The fan theory that Ward could be the Marvel character Hellfire is now dead in the water, replaced by the slim possibility that he’s the Grim Reaper instead. Hey, it could happen.

With Fitz and Simmons (the show’s stand-out roles this season) facing a choice between abandoning each other or unleashing a deadly monster, “Maveth” veered towards a more mythical tone than the show’s usual espionage drama. This may actually be an improvement, because it allowed us to focus on FitzSimmons’ emotional arc instead of their complicity in S.H.I.E.L.D.’s darker side: kidnapping civilians, widespread surveillance, and locking Inhumans in storage tanks. Even when they’re up against alien hell-beasts and Nazi cults, it’s often hard to sympathise with S.H.I.E.L.D.’s methods.

It’s been a gradual journey, but episodes like this remind us how far Agents of S.H.I.E.L.D. has come as an extension of the Marvel franchise. While the movies and other Marvel shows take care of solo heroes and “event” storylines, Agents of S.H.I.E.L.D. now feels convincingly similar to a fast-moving superhero team comic—including comic-style settings like alien planets and HYDRA castles.

Still, we can’t help but wonder how this will fit in with Captain America: Civil War next year. “Maveth” didn’t so much end on a cliffhanger as a tangle of open-ended questions. Will Civil War’s superhero registration act factor in when the show returns in March? Will the Inhumans finally cross over into other corners of MCU? Or will Agents of S.H.I.E.L.D. remain on the backburner, never quite making an impact on the rest of the franchise? The latter is the most likely option, although fans are no doubt hoping for a repeat of last year’s Winter Soldier upheaval.