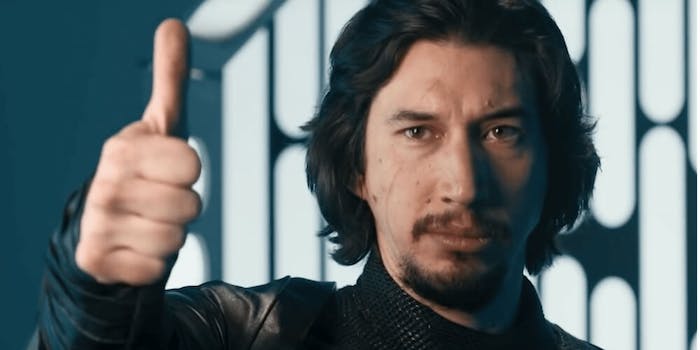 'I made four new friends and only killed one of them.'

Adam Driver hosted Saturday Night Live this weekend and surprised fans with the return of a classic from his 2016 hosting debut: “Undercover Boss: Starkiller Base.”

In the original sketch—a spoof of the reality TV show, Undercover Boss—Driver’s character from Star Wars: The Force Awakens, Kylo Ren, goes undercover as a radar technician named Matt to spy on the First Order. The skit was an immediate hit.

Nearly four years later, Driver is back on the show to reprise his character for a special “Undercover Boss: Where are they now?” episode.

In the latest episode, he’s disguised as Randy, an entry-level intern.

“I’ll say it: I haven’t been the best boss lately,” Driver says dressed as Ren.  “I’ve been a little distracted by some personal drama.”

For those who have missed the latest films, that drama includes: killing his father, cutting his mentor in half, firing upon his mother’s spacecraft, and becoming obsessed with finding a young Jedi named Rey.

To fit in with his colleagues, Ren jokingly says “OK Boomer” in a monotonous voice. He’s met with weird stares and some scattered laughs. He later gets in the face of a co-worker who says she doesn’t care whether Rey takes Ren’s hand if the latter were to offer it for a second time.

Of course, things get much worse after Ren—still dressed as Randy—is chided for messing up an admiral’s coffee order. The Star Wars antagonist blows the admiral’s head off in one swift look.

In one of the final scenes, “Randy” tries to help a fellow intern, played by Chloe Fineman, get a shot at becoming a fighter pilot. But then the intern screws everything up and says she wants to fly like Luke Skywalker, not Ren.

Ren, of course, kills the intern with his lightsaber. You want to fly like Skywalker? “And now you’ll die like him, too,” Ren says. “OK boomer?”

“I made four new friends and only killed one of them,” he says at the end of the sketch. “I’d say that’s a pretty good start.”