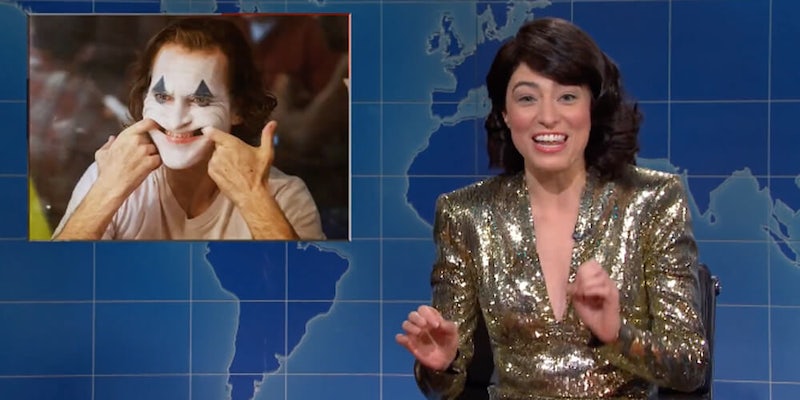 What does almost every Oscar-nominated movie have in common this year?

Melissa Villaseñor completely skewered the Oscars on Saturday Night Live, taking aim at the fact that, as is so often the case, the Academy is honoring films about angry white dudes while ignoring basically everyone else.

In a segment for “Weekend Update,” Villaseñor enthusiastically declares that she’s ready to win an Oscar for her original songs she wrote for all the nominated movies. Over elevator muzak, she shares her songs. The first one, for the controversial sympathetic take on Joker, basically just describes the plot of the movie before ending with an apt observation:

It’s the set up for the real joke: Every single song Villaseñor sings about these Oscar-nominated movies follows the same tune and describes the films as being about white male rage. The Irishman, Once Upon a Time in Hollywood, Jojo Rabbit, 1917, and even Toy Story 4 all get the musical treatment in the skit, though it’s not necessarily the films themselves she’s poking fun at, it’s the fact that there’s a common theme running through all of the movies nominated for awards this year. It’s something many have found particularly frustrating in a year where great films by and about women have been collectively snubbed, something she points out in a line about Little Women and writer/director Greta Gerwig.

The skit struck a chord with people online, and it wasn’t long before #WhiteMaleRage became a hot topic on Twitter. And in a twist that shocked literally no one, white males (#notallwhitemales) got pretty ragey over it.

“Bold move SNL, singing about ‘white male rage,'” TheQuartering tweeted. “I am sure that will bring back all the ratings you’ve been losing to people who are sick of that kind of bullshit.”

Bold move SNL, singing about "white male rage" I am sure that will bring back all the ratings you've been losing to people who are sick of that kind of bullshit. :) See you idiots Monday

Can someone plz explain how a skit on @nbcsnl with a song "White Male Rage" is not racist. Its this garbage that continues a divide that was created 10 yrs ago at a time we should have moved past this as. #stopracistpoliticsofdivide and Unite as a proud Nation that's indivisable

Now where could the "women aren't funny" trope come from…??? hmmmmmmmmmmmmmm

Why do you idiots complain about racism yet proceed to do racist shit like white male rage? pic.twitter.com/9curPRTejE

I think I'm understanding why this sign exists pic.twitter.com/yI4rV0heyl

And some really took the whole thing as an attack on Joker rather than, again, just pointing out that white men getting angry seems to be the only theme predominately white male Academy voters want to get behind.

The movie is about a man with mental disorders brought on by a life time of torture, and they wanna simplify it to “White male rage”.

“joker is about white male rage!1!!1!!” jist say you don’t care about mental health and go

You can really tell the SNL writers have never actually watched Joker.

"It was about a White Guy, so it must have been about White Male Rage."

That little assumption is what you would call, Ra-Ra-Ra-Racisit

Comedy is about sharing laughter, one of the best medicines for those with mental health issues.

Taking a movie all about such issues and mocking it for just being about 'white male rage' is a new low for you. https://t.co/npxyKwRakR

But despite all the dudes getting mad about a comedy show, most of the comments in the trending tag have been an acknowledgement of how timely and hilarious Villaseñor’s tunes are.

“My thanks to Melissa Villaseñor for the new ringtone,” tweeted Charlotte Clymer. “It’s an instant classic.”

This shit SLAPS I was just shimmying to this in m bathroom. When’s the album drop? https://t.co/bhylLKCcfM

Welp @TheAcademy you've just been handed your opening number for #Oscars2020. I hope you do it justice. https://t.co/XZ1y55y686

And plenty found the backlash to be just as enjoyable as the skit itself.

“Nothing validates the #WhiteMaleRage hashtag more than a bunch of white dudes getting Mad Online that a Latina woman made fun of JOKER on a comedy show,” Rob Sheridan pointed out.

Nothing validates the #WhiteMaleRage hashtag more than a bunch of white dudes getting Mad Online that a Latina woman made fun of JOKER on a comedy show.

Me looking at my notifications of the white males raging about how they aren't raging thus proving the point. pic.twitter.com/8k6DZfVdz1

For the record, most of us white males aren't offended by joking about "White Male Rage".

If anything, I suspect those who are triggered by it are the toxically white, toxically male, toxically angry guys who, quite honestly, deserve to get mocked because they're assholes.

So don’t bother tuning in for the Oscars this year, we already know exactly what’s going to win–it’s white male rage!