Rumors of DMCA slap-downs have been exaggerated, Activision says.

Which is more important, the freedom to post gameplay videos on a YouTube channel, or a game publisher protecting players by making it more difficult to cheat?

Redditors are passing around what is purportedly a notice from Machinima, issued to its partners in the Machinima Talent Network, to be wary of increased vigilance by Activision in terms of issuing copyright takedown notices on videos that show glitches in Call of Duty: Advanced Warfare. DMCA takedown notices have become increasingly controversial within the YouTuber video game community. 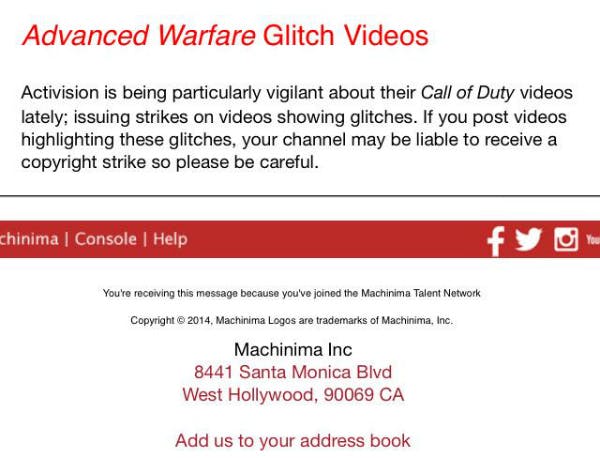 Machinima did not respond to the Daily Dot’s request for comment. According to Activision, however, nothing has changed from standard operating procedure in regard to Call of Duty videos. There’s no “increased vigilance,” just regular vigilance. A representative from Activision gave us the following statement.

“We’re excited that so many fans are having fun playing the game and posting videos of their gameplay. We love watching the videos ourselves. Occasionally, some folks post videos that promote cheating and unfair exploits. As always, we keep an eye out for these videos — our level of video claims hasn’t changed.  We are appreciative of the community’s support in helping to ensure that everyone has the best playing experience possible.”

Glitching, or taking an unfair advantage in a video game by opportunistically using a bug in the game’s code, is controversial by itself. People who glitch say they are merely taking advantage of weaknesses in the system that have nothing to do with any attempts by them to hack the game, and therefore are fair tactics.

Glitching in a Call of Duty game commonly involves getting under the map, or wedging into areas that are otherwise inaccessible if the glitch isn’t employed. This, then, allows the glitcher to shoot players without being seen or the risk of being retaliated against. Competitive, fair-play gamers who get killed by glitchers have the opposite take on whether glitching is acceptable behavior or not.

There are likewise two takes on whether DMCA takedown claims against Call of Duty glitch videos are to be lambasted or championed. A healthy percentage of Redditors on /r/gaming are lobbing complaints about freedom of speech, countered by arguments that copyright claims are not actually a suspension of first amendment rights. On the Advanced Warfare subreddit, on the other hand, hardly anyone seems to care about the supposed DMCA takedowns, and of the tiny handful of people who do care, half are supportive of what Activision is doing. 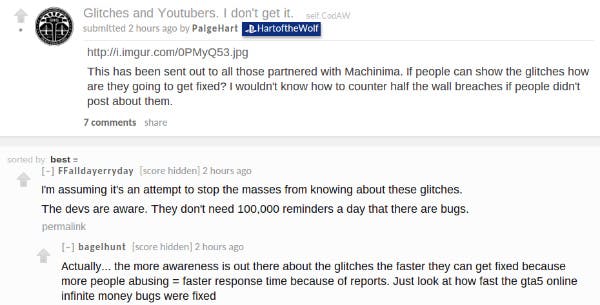 There’s a difference between a video that specifically instructs people on how to employ a glitch and a video that demonstrates the existence of a glitch. The former are likely suspects for a DMCA takedown. The latter, however, can be tools to help Call of Duty players learn how to avoid specific glitch cheats, and/or how to prevent other players from attempting the glitch in the first place.

In this YouTube video, a player discovers the existence of a glitch in which Advanced Warfare players can lock themselves into an elevator, and invisibly shoot out the elevator doors at passers-by. This video also demonstrates how glitchers can screw over their own teammates, when the glitcher effectively takes themselves out of the fight.

One could argue that dissemination of glitches is going to happen regardless of whether or not YouTube glitch videos are allowed to remain on the Web. That argument would make DMCA claims seem pointless.

Though, if YouTube videos chronicling glitches suddenly ceased to exist, one could also argue that having to actually read a how-to guide instead of watching a video might be unpalatable to gamers who want to get their glitch on. After all, glitching is about taking a shortcut, versus putting in the work to win fairly.