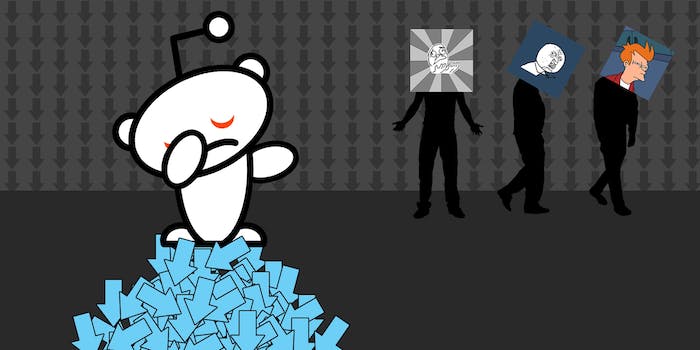 It's been a bad few weeks for meme generators on Reddit.

At 1 pm ET, moderators from Reddit r/AdviceAnimals, a default subreddit whose 2.6 million readers have created some of the Internet’s most enduring image memes, notified administrators that Meme Generator was using bots to increase the visibility of posts featuring a link to the site.

Voting bots on Reddit use dummy user accounts that upvote or downvote a post. The more upvotes, the more visible a post appears on Reddit, and the more likely it reaches the front page. With more than 67 million unique visitors in July, a front page post often results in a massive spike in visitor traffic, and a resulting spike in advertiser dollars on the lucky page.

“There was no subtlety to their tactics, no attempt to hide their tricks,” r/Adviceanimals moderator nickwashere09 told the Daily Dot. “It was a very blatant attack.”

Nickwashere09 provided the following screengrabs captured by redditor yourfriendshateyou to the Daily Dot showing Meme Generator posts collecting “a stupid amount of upvotes in a very short amount of time.” (Click for a larger image.) 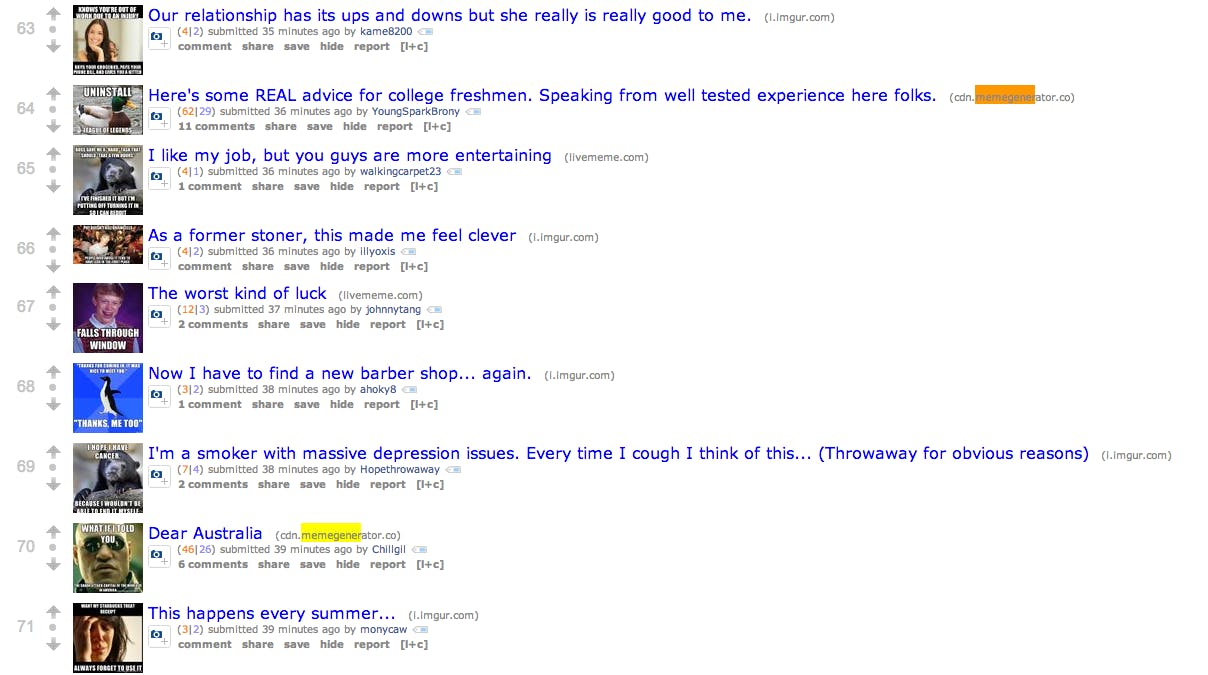 Before it was banned, 8.7 percent of Meme Generator’s visitors came from Reddit, according to Alexa.

Meme Generator was founded in 2009 by a mysterious figure known as Eff Snarf. The 30-something (his exact age is unknown) told the Daily Dot in September 2011 that he started the site while browsing 4chan. Snarf patched the site together on his own, giving users the ability to quickly caption and share the Internet’s most popular image macros, many of which originated on the anarchic Web community 4chan. That rubbed the community, and its founder Christopher “moot” Poole the wrong way.

“People think that Meme Generator is backed by some huge corporation exploiting 4chan’s content and they have no idea it’s a single person garage thing,” Snarf told the Daily Dot in 2011.

Snarf has yet to break his silence regarding the ban. This is a stark difference to the reaction of Quickmeme cofounder Timothy Wayne Miltz after his site was banned on June 23.

Less than a day after that ban, Miltz denied all charges and engaged in a smear campaign against the creators of the popular Reddit plugin Reddit Enhancement Suite (RES). Miltz claimed that RES colluded with meme generator Livememe to pilfer traffic away from Quickmeme using a server called resme.me—claims he never backed up with evidence.

Miltz’s desperate attempt to salvage the reputation of his site was snuffed out after long standing r/AdviceAnimals moderators provided detailed accounts of the months-long investigation to the Daily Dot. This included the creation of a private subreddit to compile evidence, a close study of chat logs from Internet Relay Chat (IRC), and use of the Wayback Machine, a time capsule that archives old versions of websites, to prove that an r/AdviceAnimals moderator was actually someone working for Quickmeme.

Since Quickmeme was banned from Reddit, its traffic has plummeted. Meme Generator will likely see a similar result.