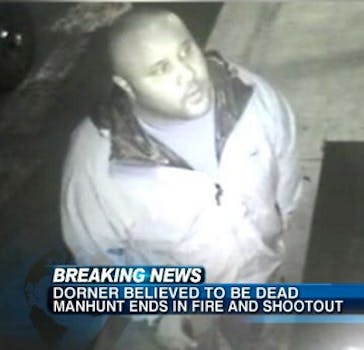 A police scanner recording circulating online apparently reveals county sheriffs giving the order to burn down the cabin where fugitive ex-cop Dorner was holed up for a standoff with police.

An audio recording from a California news report posted to YouTube may have revealed that a member of the San Bernardino County Sheriff’s Department ordered police to burn down the cabin that allegedly contained the ex-cop fugitive Christopher Dorner.

In a 50-second KCAL9 news clip surveilling the cabin that was uploaded to YouTube Tuesday night, two policemen can be heard yelling over a police scanner to “Burn that fucking house down. Right now, burn this motherfucker down.”

Previous reports about the fire left its causation up to the imagination; nobody could confirm what caused the cabin to go up in flames.

Dorner, a former officer in the Los Angeles Police Department on the run after allegedly killing four people, including a policeman, was known to be inside the cabin for much of the day on Tuesday. A spokeswoman for the San Bernardino County Sheriff’s Department could not confirm that Dorner was in the cabin at the time that it went up in flames, but she believed he was.

“Right, we believe, correct, we believe, we believe that the person that barricaded himself inside the cabin engaged in gunfire with our deputies and other law enforcement officers, is still inside there, even though the building burned down, yes,” Cindy Bachman told ABC News Tuesday night.

At the time, an official monitoring the situation said the the cabin was still too hot to properly inspect. They’d have to wait for the wreckage to cool down before they could search for a body.

The Associated Press later reported that a charred body and a driver’s license with the name “Christopher Dorner” had been found inside the burned cabin.

Dorner popped into the national conversation last week after he was named as the chief suspect in the killing of LAPD captain Randal Quan’s daughter Monica and her fiancé, who were both found shot to death Feb. 3. A lengthy and outrageous manifesto supposedly penned by Dorner followed three days later. By Friday, Feb. 8, the man had become a meme.

Dorner’s online presence escalated throughout the week, with viral Facebook posts, members of Anonymous saluting his efforts, and jokers on Reddit and Tumblr going so far as to dub him “Chocolate Rambo.”

At one point on Tuesday, his Internet presence grew so great that Twitter was forced to block the hashtag #dorner in an effort to aid authorities in the manhunt.