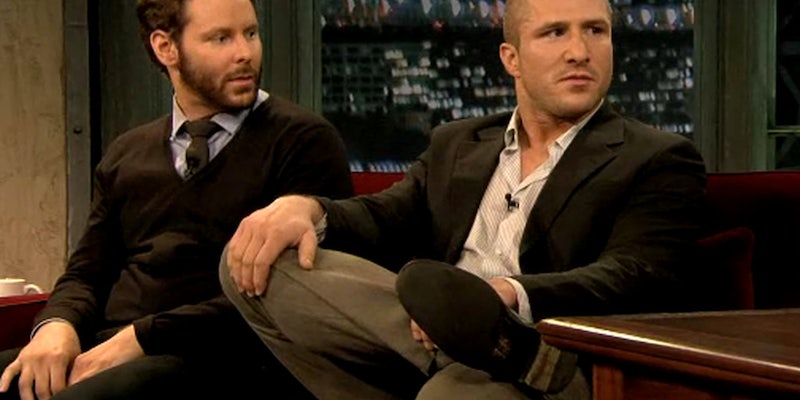 You'd think that after launching a video-chat service, these two Napster pioneers would be better at small talk.

The two appeared on Late Night with Jimmy Fallon on Tuesday night, and it was just as uncomfortable to watch as Airtime’s star-studded debut presentation. Not even the always jovial Fallon could break Parker and Fanning’s aloof and reserved personalities during the five-minute segment.

The guys briefly talked about the rise and fall of Napster, if you want to hear that laborious tale again. They also explained why they reunited again to create Airtime, a social-based video chatting software that connects you to people who share similar interests.

“It wasn’t until we found something we both wanted to work on and we’re both excited about,” Fanning offered, in one of the few sentences he spoke.

Parker gave Fallon an explanation on what Airtime was. “It’s a great service that allows you to chat with any of your friends!” he explained, without offering how Airtime is different from say, Skype, Chat Roulette, Facebook chat, or Google+ Hangouts, for starters.

Fallon thinks he found one use for Airtime: dating. Freaking out faster than seeing Mark Zuckerberg at the Golden Corral buffet line, the two guys quickly distanced Airtime from that explanation.

“It’s definitely possible people use it to date, but it’s important it’s not the focus of the product,” Fanning said, adding that dating sites have a “stigma” attached to them.

If this blundering sideshow of social interaction is an indication of Parker and Fanning’s upcoming media appearances, maybe they should just see how long they can extend Joel McHale’s contract and leave the talking to him.