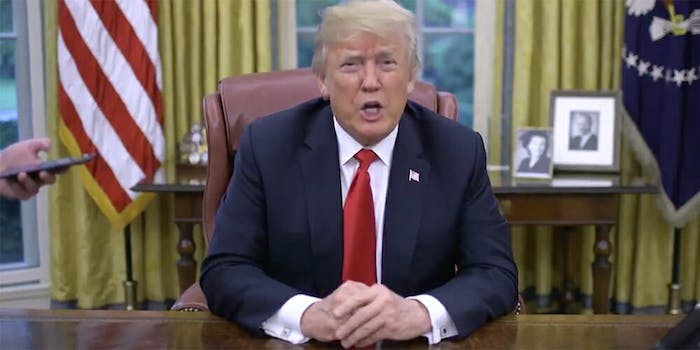 'I could deflect and divert to "Yanny" if you need me to.'

The White House on Thursday put out a video in response to the internet-wide “Yanny” versus “Laurel” debate—and you know what? Even for beating an already dead meme to death, it’s actually not terrible.

The 45-second parody video posted to Twitter features the main White House cast of characters, each polled on whether they hear “Yanny” or “Laurel” in the now-viral audio clip (which we now know was really Laurel all along). The video is surprisingly lighthearted, and even Ivanka Trump looks particularly human for once.

There are even bits of self-aware humor, with Kellyanne Conway and Sarah Huckabee Sanders taking joking stabs at deeply contentious issues.

“I hear Laurel. But I could deflect and divert to ‘Yanny’ if you need me to,” Conway says.

“Clearly you’re getting your information from CNN because that’s fake news. All I hear is Yanny,” says Sanders (who with her Southern twang pronounces the word sound like Greek musician Yanni).

As for what President Donald Trump heard…

“I hear covfefe,” he says, riffing on his infamous typo while bringing us out of 45 seconds of almost-pleasant White House fun and back to the cold reality where he runs the country.