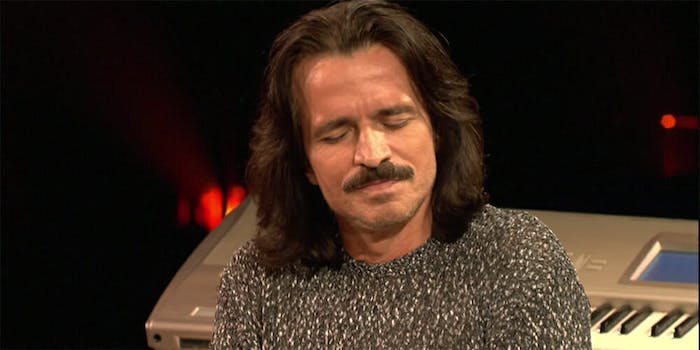 Yanni finally weighs in on the Yanny-Laurel debate

You won't believe what he heard.

In case we haven’t beat the Yanny versus Laurel debate to death by now (we certainly have), one more man has weighed in on what he hears in the mysterious audio clip. That man is Yanni—and he hears “Yanni,” of course.

The Greek musician, best known for filming a live concert at the Acropolis in Greece and who the New York Times reports is still playing live shows at 63-years-old, on Wednesday tweeted a video of himself listening to the divisive audio clip.

“Yanni,” he says with a chuckle, perhaps delighted that the viral phenomenon has greatly improved his Google rankings in the past few days.

The video followed up his previous Yanny-versus-Laurel tweet, which was accompanied by a great gif of himself.

The reaction you make when people think it’s Laurel and not Yanny… #YanniToBeExact pic.twitter.com/Zp1hbvK2AP

Thank you, Yanni, for finally putting this already-tired debate to rest. Now we can all go home and enjoy some easy listening.