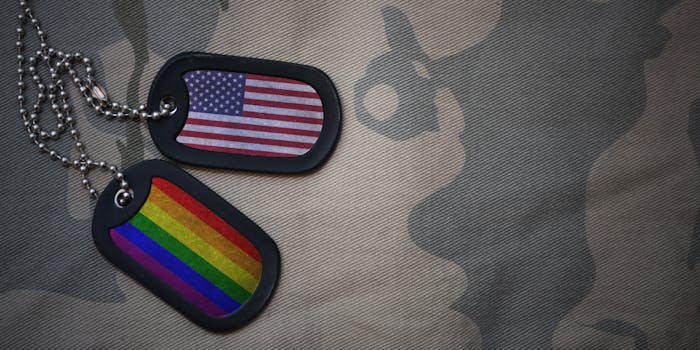 It's been a year since the Pentagon announced it would lift its ban on transgender servicemembers.

U.S. military leaders will ask for a six-month delay in allowing transgender people to enlist, the Associated Press reported.

According to anonymous military officials, service leaders agreed on requesting a six-month waiting period prior to the enrollment of transgender service members. The agreement is a paring-down from the two-year waiting period that the Army and Air Force originally requested, a compromise reached in order to avoid further criticism in Washington.

The chiefs will also require that enlisting members who are transgender be two years into their transition, a six-month increase from former Defense Secretary Ash Carter’s requirement of 18 months.

Current transgender service members have been able to openly serve since Oct. 1, but Carter originally gave military until July 1 to develop policies for allowing trans people to join. As many as 250 service members are already in the process of transitioning or have been approved to “formally change gender” within the Pentagon’s personnel system, the AP reports.

Despite being given a year for policy development since Carter’s original announcement last June, officials are seeking an extra six months in order to further these policies. Officials said the six months will also allow services to gauge how current transgender military are being treated, if they have medical issues or face other obstacles that impede their ability to serve, and if they’re facing discrimination or have disciplinary issues.

Both the Army and Air Force had originally planned to request two-year delays to “further study the issue.” The Navy had originally suggested it was ready to enlist in July, but it backtracked with a request of one year to accommodate a request from the Marine Corps.

Earlier this month, the U.S. Army unveiled its “Transgender Training” sensitivity seminar required for all officers, non-commissioned officers, and civilians working with soldiers.

“Each day that passes without implementing the final piece of this important policy harms our military readiness and restricts the Armed Forces’s ability to recruit the best and the brightest,” Stephen Peters, a spokesperson for the Human Rights Campaign and a Marine veteran, told the AP. “There are thousands of transgender service members openly and proudly serving our nation today, and as they’ve proven time and time again, what matters is the ability to get the job done—not their gender identity.”