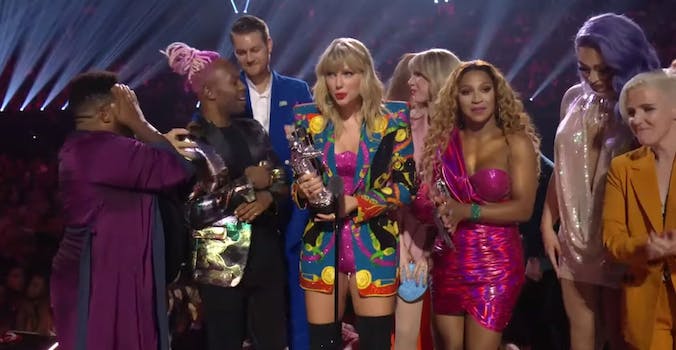 Taylor Swift calls out the White House at VMAs

She wants a response to her petition.

In the wake of backlash to her silence during the 2016 election, Taylor Swift began to wade into the political arena. This year, she made her biggest foray yet, launching a Change.org petition in support of the Equality Act.

The legislation, which passed the House of Representatives in May, would help protect LGBTQ people from discrimination in the workplace.

During her video of the year win for “You Need to Calm Down” at Monday’s MTV Video Music Awards, Swift plugged the petition, noting that it already had half a million signatures.

“It says we all deserve equal rights under the law,” she said.

“You want a world where we are all treated equally under the law, regardless of who we love, regardless of how we identify,” she said of people who signed, noting that her petition—which was at the end of her video—had “five times” the signatures that it would need to  get a response from the White House.

Swift is probably referring to the old-Obama era standard that it would respond to petitions on WhiteHouse.gov that garnered 100,000 signatures. The White House, Trump or otherwise, doesn’t have any obligation to respond to Change.org petitions.

After the bill passed the House, the White House spoke out in favor of the Senate killing the bill, saying it was laden with “poison pills.”

“The Trump administration absolutely opposes discrimination of any kind and supports the equal treatment of all; however, this bill in its current form is filled with poison pills that threaten to undermine parental and conscience rights,” an administration official told the Washington Blade.

After Swift launched her petition, numerous Democratic senators signed on to it, publicly tweeting their support.