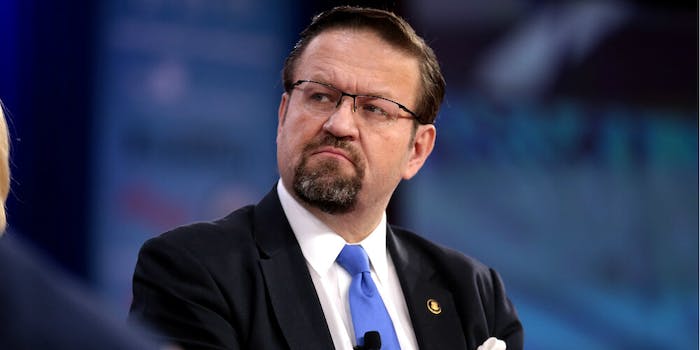 'The only thing @sebgorka is impaling is his Fleshlight.'

Sebastian Gorka, President Donald Trump’s former aide, blocked a Republican pundit on Twitter after he joked about a fleshlight being “the only thing” Gorka is impaling.

The feud between Gorka and Rick Wilson has been ongoing for some time now. It seemed to reach a boiling point on Jan. 23.

The latest dust-up between Gorka and Wilson started after Gorka quote-tweeted a clip of himself on The Candace Owens Show. In the clip, Gorka expresses frustration over not seeing a “manly man” while on vacation with his family.

To accompany the clip, Gorka tweeted that Wilson is a “Beta-Male RINO.” Gorka has long had a fascination with “alpha-males” and classifying other men who he views as “less superior” as “beta-males.”

Wilson then fired back at Wilson over the callout, joking that Gorka continues to talk “shit” behind his back.

As usual, #softbitchseb @SebGorka, the Dragon of Budapest, Lord of the Fish Oil talks shit at me from behind a block.

Seb, no matter how many times you beg for pictures of my junk, the answer is always no.

Wilson then tweeted that Gorka may or may not be writing “himself into various softcore mommyporn.”

“The only thing @sebgorka is impaling is his Fleshlight,” he added.

I’m not saying that @SebGorka has anom de fanfic and writes himself into various softcore mommyporn, but I’m not saying he doesn’t, either.#FiftyShadesOfSeb

The only thing @sebgorka is impaling is his Fleshlight. https://t.co/ZMRArdmPpV

Gorka then appeared to unblock just to reblocked Wilson on Twitter. Gorka has previously boasted about blocking 16,000 “asshats” on the platform.

It didn’t stop there.

A “superfan” of Gorka allegedly contacted Wilson over the joke, alleging that it crossed the line.

The caller supposedly added that Gorka is a “manly married man who has a wife and kids.”

– I did not know Seb Gorka had superfans.

– I did not expect one to call me.

– So so so angry that I made a "the only thing Seb impales is his Fleshlight" joke b/c Seb is a "manly married man who has a wife and kids."

Gorka, who hosts the right-wing radio show “America First with Sebastian Gorka,” is no stranger to controversy. He recently referred to teenage climate activist Greta Thunberg as “thunder thighs.” In the past, he also received backlash for peddling fish oil pills to his listeners and for driving around in a 2.3L EcoBoost Mustang.

The Daily Dot has reached out to Sebastian Gorka and Rick Wilson.