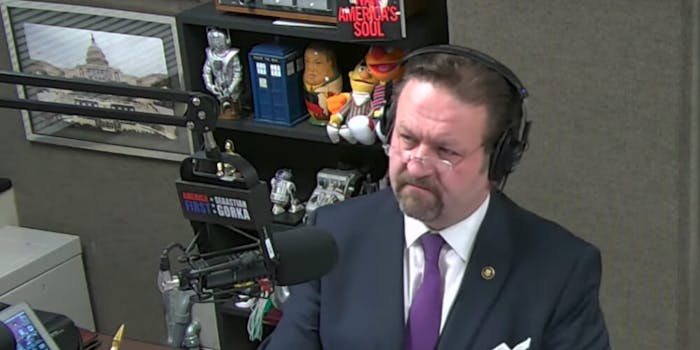 Media Matters posted a clip of an exchange between Gorka and a guest on his right-wing radio show, Andrew Klavan, an author and conservative political commentator. During the conversation, Gorka and Klavan discuss Nick Sandmann, the Covington Catholic student who made national news after a video of the teen at a protest went viral. In the video, the teen, who was wearing a MAGA hat, stares at a Native American elder. The teen recently reached a settlement with CNN after suing for defamation. CNN had reported that Sandmann engaged in “racist conduct.”

“Covington Catholic student Nick Sandmann has received a settlement from CNN after the $275 million lawsuit was filed against CNN,” Gorka said.

Then, somehow, the two steered their conversation toward Thunberg.

“I heard about this too, and boy, oh boy does he ever deserve it. If ever a kid–You know, these are people who will defend Greta Thuns–whatever her name. What is her name? Greta Thunberg?” Klavan asks.

As the conversation continued, Klavan tried to point to “liberal hypocrisy” for not supporting Sandmann, arguing that they would fight harder to defend “any 16-year-old who stands up for a left-wing cause.”

“And suddenly, you know, if you say anything at all about them, you’re an evil child molester,” he added.

Many blasted the 49-year-old for his “gross” and “pervy” comments about the 17-year-old’s body.

Another questioned whether Gorka was one of convicted sex offender Jeffrey Epstein‘s friends.

“He seems REALLY preoccupied with young girls,” they wrote.

Um, by any chance was Sebastian Gorka one of Jeffrey Epstein's friends or clients? He seems REALLY preoccupied with young girls.

Sebastian Gorka is an ugly mug. Greta’s thigh size is irrelevant. My question is Why is he critiquing a minor’s body? Is he some kind of pervert? Gorka is a crusty & mentally warped human. It’s clear that he is jealous of Greta’s thunder. https://t.co/QuxNvaXMOw