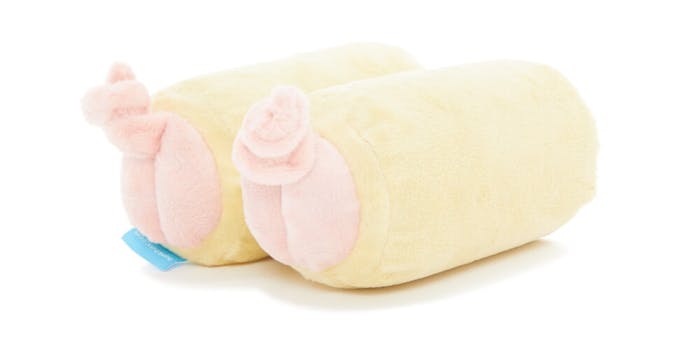 This BarkBox toy looks too much like a pocket pussy

The creators say they just thought pig butts were funny.

It looks an awful lot like BarkBox made a piggy-themed sex toy for dogs—and the internet can’t stop laughing.

Many Facebook users were shocked and/or amused when they saw an ad for the November BarkBox featuring a pig-in-a-blanket toy. When BarkBox was putting together its November box, the plan was not to bring a whole new meaning to the phrase “crank your hog,” but here we are.

Pigs in a blanket take many forms, but the basic principle is a sausage in a roll. In its attempt at a clever and cute toy, BarkBox replaced the sausage with a pig for the toy. On one side the cute piggy nose pokes out. On the other, a pink curly tail sits atop a defined pig buttcrack. And the result looks so much like a pocket pussy.

In its replies to the ad, BarkBox coyly would neither confirm nor deny that it saw the similarities to a fleshlight before customers pointed it out. The company also repeatedly advised people to not put the toy on their own or—God forbid—their dogs’ genitals. When one woman asked how this got past a focus group, BarkBox replied, “Our dogs test the toys, juliet. they are good and wholesome.”

BARK’s head of social media, Alexis Nelson, gave the Daily Dot a peek behind the curtain. “We figured it’d be a funny little joke just between us and our subscribers. And that we’d all have a chuckle simply because li’l butts are generally funny,” Nelson said. “What happened instead was a gorgeous internet dumpster fire of epic proportions because the toy was WAY SPICIER than we realized. I think we all learned something today.”