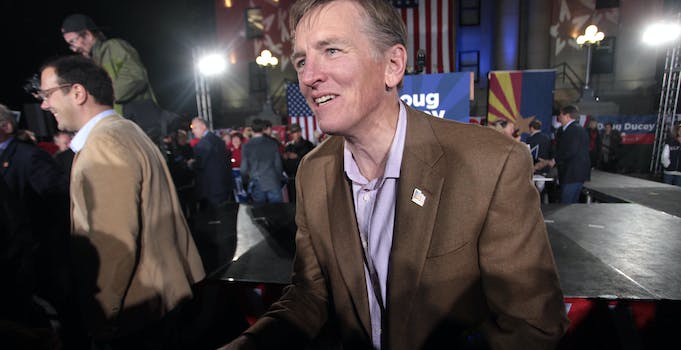 Congressman shares Q conspiracy while ranting about coup against Trump

A Republican lawmaker retweeted a post about the QAnon conspiracy theory on Monday while offering his own proof of a coup attempt against President Donald Trump.

Congressman Paul Gosar (R-Ariz.) retweeted a prominent QAnon supporter while offering a “tip” to the FBI about “British agents and Democrat operatives” working to topple the president.

“I have a tip. I think high level FBI agents may have colluded with British agents and Democrat operatives to initiate an illegal coup against @realDonaldTrump and @POTUS,” Gosar said. “I mean at least this bears a cursory review. Perhaps. Maybe.”

I have a tip. I think high level FBI agents may have colluded with British agents and Democrat operatives to initiate an illegal coup against @realDonaldTrump and @POTUS . I mean at least this bears a cursory review. Perhaps. Maybe. https://t.co/wfIj79T2Gi

The QAnon post retweeted by Gosar points to “1827,” a number that refers to a specific message known as a Q drop. Those often incoherent messages, alleged to be from a secret high-level ally of the president, offer vague claims about impending government action.

“Big week coming up. See something, say something,” the tweet states, before linking to the FBI tips site.

The Q post cited includes a clip of Deadpool eating popcorn and declaring “Previews are over. Showtime!”

The drop cited is from over a year ago, posted last August.

The statement, like most Q drops, is obscure enough for Q followers to contort any and all world events into proof of Q’s legitimacy, despite countless predictions falling flat time and time again.

His tweet is most likely referring to the Spygate theory about the FBI and intelligence agencies conspiring to sink Trump’s candidacy in the run-up to the 2016 election. Gosar does not follow the account he retweeted, but does follow a number of other accounts with ties to the conspiracy.

While the QAnon conspiracy may seem absurd and comical to the outside observer, the movement has become increasingly prevalent. Q signs and merchandise can be seen at the president’s rallies and even in campaign material.

A recent FBI memo obtained by Yahoo News specifically cites the QAnon conspiracy as a “domestic terror threat,” warning that it could incite violence.