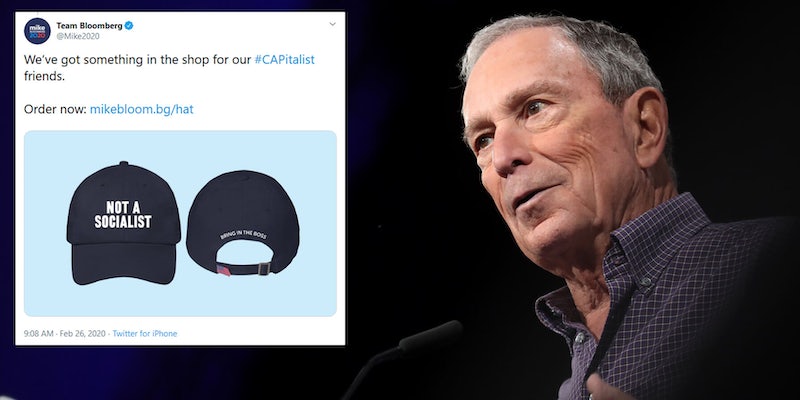 The hat's aren't free because capitalism.

Billionaire 2020 Democratic presidential candidate Michael Bloomberg’s campaign is now selling hats where you can declare, unequivocally, that you are “not a socialist.”

But because Bloomberg is definitely not a socialist—you have to pay for these hats. It’s available for pre-order for $17.76 on the campaign’s website.

On the front of the blue cap, it says “NOT A SOCIALIST,” and on the back it says “Bring In The Boss.”

The former New York City mayor’s campaign Twitter account posted about the hats on Wednesday, just hours after Bloomberg appeared alongside his 2020 rivals at last night’s debate, including Sen. Bernie Sanders (I-Vt.). Sanders and his brand of Democratic Socialism has become an ideological opposition to Bloomberg as the Democratic primary continues.

“We’ve got something in the shop for our #CAPitalist friends,” the campaign tweeted on Wednesday, with a link to buy the hat.

The hat is the latest in a number of gimmicks Bloomberg’s campaign has rolled out in recent weeks including: strange messages on Instagram influencer pages and cringey billboards that were dunked on immediately by people online.

They were also unfavorably compared to MAGA hats.