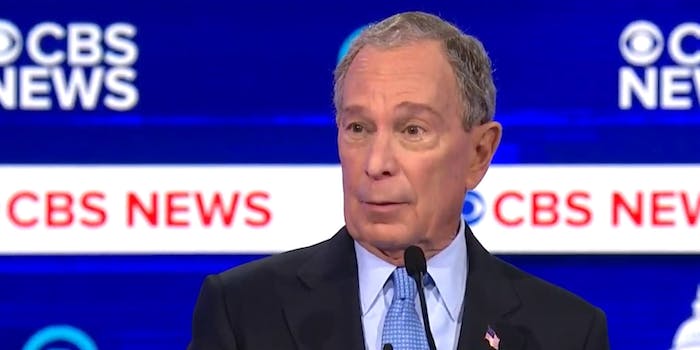 Bloomberg rolls his eyes when challenged over sexist comments

Warren goes for the jugular on gender discrimination.

At tonight’s Democratic presidential debate, Sen. Elizabeth Warren (D-Mass.) called out former New York City Mayor Michael Bloomberg for his record on gender equality. She again accused him of making women who alleged sex discrimination by him or at his companies to sign non-disclosure agreements and of personally telling a female employee to get an abortion, alleging that he said to “kill it.”

“Let us have the women have an opportunity to speak,” Warren said. “The Bloomberg corporations and Mayor Bloomberg himself have been accused of discrimination. They are bound by non-disclosures so that they cannot speak.”

“If he says there is nothing to hide here, then sign a blanket release and let those women speak out, so they can tell their stories.”

The moderator then referenced reports that Bloomberg has been accused of making sexist jokes, and asked him if the women had taken his jokes wrong, or if he was wrong to make the jokes.

“Probably wrong to make the jokes. I don’t remember what they were, so I assume if it bothered them, I was wrong, I apologize. I’m sorry for that,” Bloomberg said.

“But what happened here is we went back 40 years, and we could only find three cases where women said they were uncomfortable,” Bloomberg said. “…Nobody accused me of doing anything other than making a comment or two.”

Bloomberg went on to note that he released the women from the NDAs, as Warren had requested.

“We did what she asked.”

Warren then accused Bloomberg of telling a staffer to get an abortion.

“We couldn’t figure out what she was talking about,” Bloomberg responded.

“I’m sorry if she heard what she thought she heard. I didn’t take any pleasure in that.”

Bloomberg then attempted to change the subject. It did not go over.

Several noted that Bloomberg appeared to roll his eyes at Warren.

Warren’s campaign clearly had this one ready. During the debate, her team tweeted out a blanket release for “any person with knowledge of sexual harassment, discrimination, or other misconduct” by Bloomberg or at his companies for the former mayor to sign.

Bloomberg said he will no longer use NDAs at his companies.