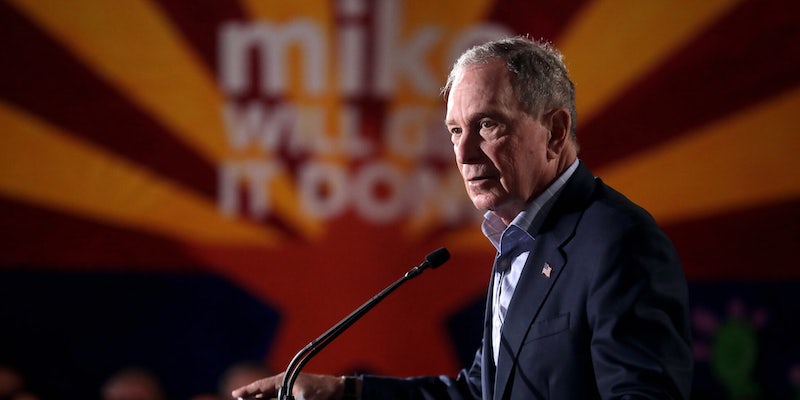 The billionaire's campaign turns to memes.

Michael Bloomberg’s self-funded campaign for the presidency has been defined by his attempts to seem authentic and relatable. From the Twitter memes to the videos of talking dogs, Bloomberg has tried to say, “Look, I’m not a billionaire, I’m just a guy named Mike.”

Whether it’s working is up for debate, but Bloomberg is employing someone from an agency with a dubious past to aid him in it.

The New York Times reported on Thursday, the minds of Jerry Media are using their large-scale network of Instagrammers and famous memers to help him.

Mick Purzycki, the Times reports, is the head of Meme 2020. He is the chief executive of Jerry Media and used the organization’s wide network of influencers to help push Bloomberg content. Jerry Media, and its founder Elliot Tebele, are not explicitly involved in the program.

Jerry Media was birthed on the back of @FuckJerry, an Instagram account that repurposed other people’s tweets and memes to amass followers. Jerry Media (a rebranding of FuckJerry after later backlash) continued that tradition by profiting off the work of comedians and meme-makers without crediting or paying them for their efforts.

That Bloomberg is using the creative power of people who hid the origins of their own “work” to come across as authentic is ironic, to say the least.

It took massive amounts of backlash and organizing by part-time workers and underemployed artists to get the company to change.

Jerry Media was also infamous in promoting the disastrous and extremely scammy Fyre Fest, helping create buzz and sell tickets for the event in an illicit fashion. At the time of the event, Purzycki was CEO of Jerry Media, a position he’d held since 2015.

Jerry Media denied it had any idea the Festival was a scam that lured people via social media hype but lacked the infrastructure to deliver on its promises of a luxury music festival.

After the debacle, Purzycki helped produce and profit off a documentary about the experience.

He was accused, repeatedly, of using the documentary to minimize Jerry Media’s role in Fyre Fest, while simultaneously positioning it to bounce back from the bad press.

Jerry Media has apologized for its efforts in stealing content,

This week Bloomberg is also attempting to tone down his past involvement in the stop-and-frisk program.