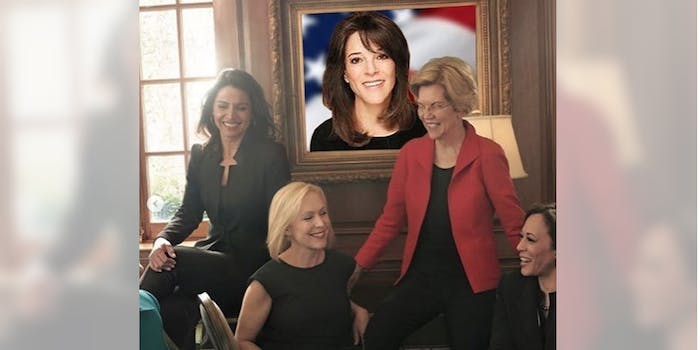 And I oop–Marianne Williamson just made her way into that Vogue photoshoot she was left out of through Photoshop.

The Democratic presidential candidate posted a Fourth of July message on Instagram, along with a series of photos, one of which is a photo from a Vogue profile featuring five women running for president. Well, make that six women, because Williamson just posted a more inclusive version of that image.

Williamson can be seen Photoshopped into a painting, hanging on the wall behind the group.

Happy July 4th! Other generations have done what they were called to do, and now it’s our generation’s time to do what we are called to do. The American revolution is an ongoing process, a continuous journey Into more and more expanded realms of possibility for everyone. It’s amazing when you dust off certain phases and reclaim them for their modern relevance. “Let freedom ring” is not just a cliche after all… #bigtruth (important note: memes found on the internet; we did not create them)

A post shared by Marianne Williamson (@mariannewilliamson) on Jul 4, 2019 at 6:06pm PDT

Williamson casually tucked away the digitally altered image as the last one in the Instagram slideshow, but her followers still took notice.

“Last picture I’m sCREAMING u are a true QUEEN,” one wrote.

Williamson notes that she did not make the “meme” but rather found it on the internet.

“All credit goes to the people of the internet who never fail to deliver,” her campaign told CNN.

Williamson was only mentioned in the profile, not photographed–something she was upset about.

“You might have noticed who’s not in this picture. And let’s be clear why it matters: the issue is ethical responsibility on the part of the media,” Williamson wrote on July 3. “The framers of the Constitution did not make Vogue magazine the gatekeepers of America’s political process, here to determine who and who is not to be considered a serious political candidate.”

You might have noticed who’s not in this picture. And let’s be clear why it matters: the issue is ethical responsibility on the part of the media. The framers of the Constitution did not make Vogue magazine the gate keepers of America’s political process, here to determine who and who is not to be considered a serious political candidate. The framers themselves determined the qualifications for the presidency: that someone was born here, is over 35 years old, and has lived here for 14 years. If they had wanted to say more, than they would have. They didn’t say more for a reason: they were leaving it to every generation to determine for itself the skill set it feels is necessary to navigate the times in which they live. President Franklin Roosevelt said that the “administrative aspects of the presidency are secondary,” and “the primary role is moral leadership.” If we’re going to free this country to be all that it can be, then first we have to free ourselves from the thought forms dictated to us by a corporate/political/media establishment. It is the people and the people alone who should decide who will be their president, unburdened by the insidious influence of an elite on patrol. Period. Full stop. #bigtruth marianne2020.com

Vogue told CNN that Williamson wasn’t included because she isn’t a member of Congress.

“We’re in no way discrediting Marianne Williamson and all she’s accomplished,” a Vogue spokeswoman told CNN Business in a statement. “For the photo, Vogue wanted to highlight the five female lawmakers who bring a collective 40 years of political experience to this race.”

Williamson made waves during the first set of Democratic debates and now has a fair share of stans, but do they stan her politics? Only time will tell, but we should know by now not to underestimate any presidential candidate, like ever.