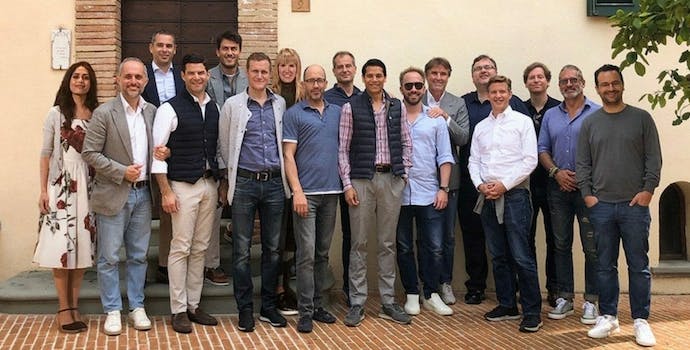 It's too late to claim they were holograms.

If you haven’t heard by now, women in tech is a hot topic (not to be confused with that store in the mall you shopped at in middle school).

Now that not having women around has finally begun to raise some eyebrows, eyes have been on equality in the male-dominated industry.

A recent picture published in a GQ article is a perfect example of making sure the ladies are represented. And all it took was for someone to Photoshop women into the frame.

At first glance, the picture looks to be exactly as it appears: a bunch of ridiculously wealthy Silicon Valley muckety-mucks at the villa of ridiculously wealthy Italian designer Brunello Cucinelli. The crew reportedly made a “pilgrimage” there last month, as a “symposium on the soul and economy” or some shit that only rich people say.

Cucinelli’s Instagram post about the trip includes actual lines like: “Together, in these days of friendship and reflection, we have confirmed once again our respect, safeguard and promotion of what has always been seen as the deepest treasure of people, the highest evidence of the original nobility of man, the utmost expression of freedom and moral supremacy: the soul.”

The pilgrimage of “tech titans” was such a smashing success that GQ decided to run one of the most effusive stories you will ever read about the whole shebang. The article included a group photo of tech bros and two don’t-call-them-tokens women.

Closer inspection of the image reveals that things might not be quite as they seem.

BuzzFeed reporter Ryan Mac first spotted that something wasn’t quite right about the two femmes among the many faces of mens.

I got some questions about this story on "tech titans" in Italy, and uhhh I think this photo is photoshopped?https://t.co/xLrslOCcwh pic.twitter.com/n0gIShty4u

In subsequent tweets, Mac delved deeper into the mystery. For starters, he wondered why the body of one of the women, SunRun CEO Lynn Jurich, was not aligned with her supposed legs. This alone may not have been dispositive; after all, Barbie herself is well known for her detachable legs.

It also seemed suspicious to him that Jurich was not included in the laundry list of tech bourgeoisie mentioned, which included DropBox’s Drew Houston, LinkedIn co-founder Reid Hoffman, VC king Lee “pass the Juul” Fixel, some dudes from Twitter, and everyone’s frenemy Jeff Bezos, who was not pictured.

Then someone ran the image through an EXIF analysis, which came back positive for Photoshoppage.

The case was officially cracked when a reverse image search unearthed the purported original, female-free picture. This image, according to Mac, was posted by corporate communications professional Ferdinando de Bellis, who has worked with Cucinelli, on LinkedIn a week ago.

So, yeah, someone added two women to a picture of brilliant tech gazillionaires with a Photoshop bad enough to be spotted by the naked eye. Suspect some irony in here somewhere.

Subsequently, GQ deleted the picture from the article and posted this update, “An image provided by a Brunello Cucinelli representative that did not meet GQ’s editorial standards was removed from this story.”

It’s like the old adage: If you can’t fix sexism in the tech industry, just Photoshop it away.