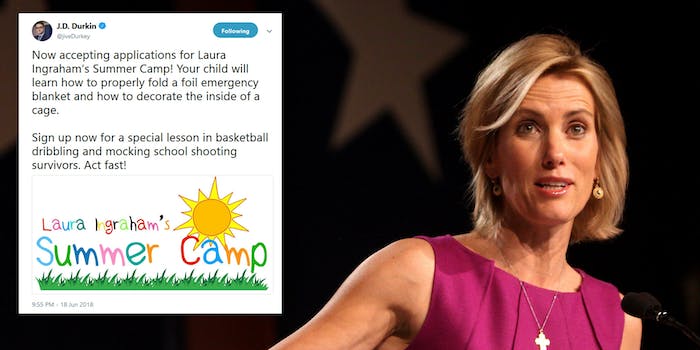 Fox News pundit Laura Ingraham weighed into the debate about undocumented children being separated from their parents at facilities along the border by comparing the detention centers to “summer camps.”

When discussing the issue on Monday night, just hours after Secretary of Homeland Security Kirstjen Nielsen defended President Donald Trump‘s administration’s use of its “zero tolerance” policy, Ingraham dismissed the enormous backlash (including stories and photos) against the practice of keeping children in the detention centers as “faux liberal outrage” before comparing the centers—where photos have shown people in cages and wearing silver foil blankets—to summer camps.

“Consistent with American law when the parties arrested, your children are either sent to relatives or they become wards of the state,” she said. “So since more illegal immigrants are rushing the border, more kids are being separated from their parents, and temporarily housed in what are essentially summer camps or, as the San Diego Union Tribune described them today, as looking basically like boarding schools.”

Ingraham then said Democrats are using the outrage from Americans surrounding the policy as a “political weapon.”

She added that liberals were “attempting to emotionally manipulate the public perception of immigration enforcement.”

At the end of the show, Ingraham seemed to realize the flippant remark was causing backlash.

“Apparently there are a lot of people very upset because we referred to some of the detention facilities tonight as essentially like summer camps,” she said at the end of her show, according to Mediaite. “The San Diego Union Tribune today described the facilities as essentially like what you would expect at a boarding school. So I will stick to there are some of them like boarding schools.”

The comparison of the detention centers—where audio has surfaced of children crying for their parents—to something like a summer camp was met with scorn online.

Now accepting applications for Laura Ingraham’s Summer Camp! Your child will learn how to properly fold a foil emergency blanket and how to decorate the inside of a cage.

Great @IngrahamAngle – sounds like a fun summer plan for YOUR kids. Send them down to the detention camps – maybe one of those fancy tents – and you can just stay home and work.

Hey @IngrahamAngle can we interest you in dropping off your kids at one of these “summer camps”. They are free i assume and there is so many good things to learn while there right? I can’t seem to come up with any. Can anyone else? Why don’t you take cameras in and show us please https://t.co/5SU3YT8ZlY

Even David Hogg, the outspoken Parkland shooting survivor, revived his effort to get advertisers to pull their ads from airing on her show.

Earlier this year Hogg made an open call for his Twitter followers to demand companies pull their ads from her show after she shared a story from a conservative website about his college rejections.

So @IngrahamAngle we meet again. Who are you biggest advertisers now?

If we get these advertisers pulled maybe @Ingraham will have to become a camp counselor and learn how wrong she is.
1. @BeachesResorts & @SandalsResorts
2.@SIRIUSXM
3. @CarfaxReports
4. @AceHardware
5. IAC (Angie’s List, Home Advisor, Match)
6. @Cabelas
7. @JohnDeere

Several companies did pull ads after Hogg called the Fox News host out. We’ll see how many follow suit this time.