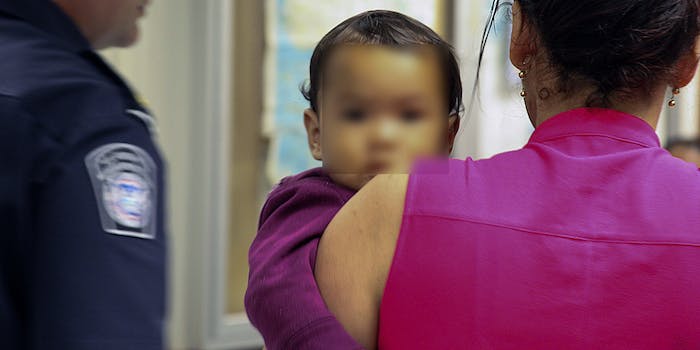 More than 1,000 children have been separated from their parents at this facility.

U.S. Customs and Border Protection (CBP) have released photos and video footage of the largest immigration processing center in the country. The facility, based in McAllen, Texas, is host to hundreds of family separations so far, resulting from the Trump administration’s “zero tolerance” policy on unauthorized immigration announced in May.

Photos released to news outlets such as the Texas Tribune, CBS, and MSNBC show immigrant children and adults contained in cages, structures built of chain-linked fences. Reporters touring the facility on Sunday weren’t allowed to take in cameras, though CBP later released footage taken of the facility.

The processing center, often referred to as “Ursula” for the street it’s on, is home to the most apprehensions and family separations, with 1,174 of the nearly 2,000 total kids having been separated from their parents there since the beginning of the zero-tolerance policy, MSNBC reported. Under the policy, announced by Attorney General Jeff Sessions, all adults crossing into the U.S. unauthorized will be prosecuted. Since the adults coming with children are being charged with a federal crime, the children are separated from their parents. Manuel Padilla, the Border Patrol’s chief agent at Ursula, said agents in the Rio Grande Valley have allowed parents with children under 5 years old to stay together.

While detained immigrants are not to be kept in the processing centers for more than 72 hours, minors are forced to stay at these facilities longer because of the backlog with the Department of Health and Human Services’ (HHS) child centers. Children who are unaccompanied or separated from their parents are put in custody of HHS’s Office of Refugee Resettlement after processing, and are either found an adult sponsor to live with, typically a relative already living in the U.S. legally, or are housed at a private child detention center.

BREAKING: Border Patrol @CBP just gave us this video of the detention facility we toured yesterday in McAllen, Texas. We weren't allowed to bring in cameras, or interview anyone. To be clear: this is government handout video. pic.twitter.com/Zjy80qIZFZ

In these photos and videos, immigrant children are seen laying on green mats on concrete floors within the metal cage cells, holding silver emergency mylar blankets. According to the Associated Press, the facility is split into wings—22,000 square feet for adults, and 55,000 square feet for children and families. The family wing is then split into four pods, separated by gender and age—two for mothers and fathers with children, and two for boys and girls 17 years old and younger.

More than 1,100 people were detained at that facility, waiting to be processed, according to MSNBC’s Jacob Soboroff. CBP told AP that close to 200 people inside the center were unaccompanied minors, while 500 belonged to “family units.”

Soboroff, who was among the journalists allowed to tour the facility Sunday, said the video of the facility shows the wing of mothers and girls at the 53-second mark. The faces of immigrants are blurred out, children laying next to mothers, people sitting in groups or recorded being ushered out of the cages.

The AP detailed the account of one advocate who visited the facility on Friday. Michelle Brané, director of migrant rights at the Women’s Refugee Commission, said she spoke to a 16-year-old girl who said she was taking care of a younger girl for three days. The child, who was four years old, was traumatized and not speaking. The teenager said she had to show other minors in the cell how to change the girl’s diaper.

Congress members also arrived at the facility on Sunday, with protesters chanting against the separation of families.

My colleagues and I toured the border patrol processing center in McAllen, TX. When I asked how frequently family could see their children, they couldn’t give me a direct answer. The immigration policies of @realDonaldTrump and Jeff Sessions are cruel and wrong. pic.twitter.com/AMplm7yx8L

Protest of a few hundred outside the McAllen Border Patrol Processing Center. Many of the chants have been directed at the children inside the building. pic.twitter.com/8u3uDb8WKX

Members of Congress toured border facilities near McAllen, TX today. They crossed into Mexico a little bit ago and walked to the bridge where asylum seekers usually wait days to be able to request refuge but there weren’t any there today. pic.twitter.com/vwpZfrk2J3

Earlier, @JulianCastro tried to get into the facility to deliver letters and toys for the children inside a DHS processing facility in McAllen. pic.twitter.com/h9Jn1ecCqW

The tour follows two tours of child detention centers that reporters were allowed on last week, the first of such tours after the zero-tolerance policy began. One of the centers, Casa Padre in Brownsville, Texas, housed five immigrant boys to a 40-square-foot room, with more than 1,200 children at the facility in total. Typically rooms housed four children each, but because of the policy splitting up families, these detention centers have become more overcrowded. The Trump administration has begun erecting “tents cities” in order to compensate for the crowding.

We saw kids eating snacks, drinking milk, snuggling with their parents, & in some cases playing with other kids. No one could leave the cage, freely. Cages are locked.
The border agents seemed empathic but were adamant: parents endangered their kids by entering illegally. https://t.co/Mw4HXI4raZ

On Monday morning, less than a day after falsely claiming that the Department of Homeland Security has no policy to separate immigrant families, Secretary Kirstjen Nielsen said DHS would “not apologize” for doing its job, and claimed it was also separating families as a precaution to prevent adult immigrants from using unaccompanied minors for protection from prosecution.