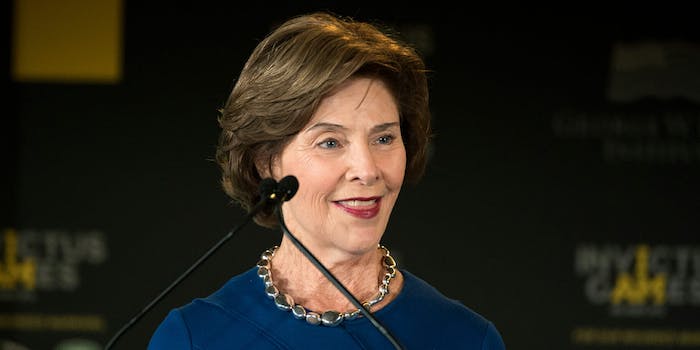 Former First Lady Laura Bush has joined a chorus of lawmakers on both sides of the aisle criticizing President Donald Trump and his administration for separating undocumented immigrant parents from their children.

The administration has removed nearly 2,000 children from their parents in the past six weeks, according to the New York Times, as part of its “zero tolerance” policy regarding undocumented immigrants.

The practice has drawn scorn both online and among lawmakers who have visited detention centers across the country.

In an op-ed for the Washington Post, Bush called the practice “immoral” and compared it to Japanese internment camps that were built amid World War II. She did not mention the president by name.

“I live in a border state. I appreciate the need to enforce and protect our international boundaries, but this zero-tolerance policy is cruel. It is immoral. And it breaks my heart,” she wrote, later adding: “Americans pride ourselves on being a moral nation, on being the nation that sends humanitarian relief to places devastated by natural disasters or famine or war. We pride ourselves on believing that people should be seen for the content of their character, not the color of their skin. We pride ourselves on acceptance. If we are truly that country, then it is our obligation to reunite these detained children with their parents—and to stop separating parents and children in the first place.”

While many people online were lauding former first lady for taking a stand against the Trump administration policy, others pointed out that her husband, former president George W. Bush, created the U.S. Immigration and Customs Enforcement (ICE) that has been criticized for its practices regarding undocumented immigrants.

it’s very nice that Laura Bush, who committed vehicular homicide and was married to the guy who created ICE and DHS, has opinions

wow, imagine how pissed Laura Bush is gonna be when she finds out who created ICE

Despite that, most people online felt that Bush’s op-ed was a galvanizing moment for those who are pushing back against the Trump administration.

I don’t think Laura Bush EVER weighed in on a real policy issue as FLOTUS. This is incredible. https://t.co/KAhjja703r

Laura Bush is exactly the lady I always thought she is. She knows the harassment and attacks she’s opened herself up to, and I’m certain she’s afraid. But she did it anyway because it is that important to stand up against this inhumane policy. Come on Republicans. Be like Laura.

Bush isn’t the only first lady to weigh in on the practice.

Over the weekend, Melania Trump‘s office released a statement where her spokesperson said she “hates to see children separated from their families” and said the first lady hoped “both sides of the aisle can finally come together to achieve successful immigration reform.”