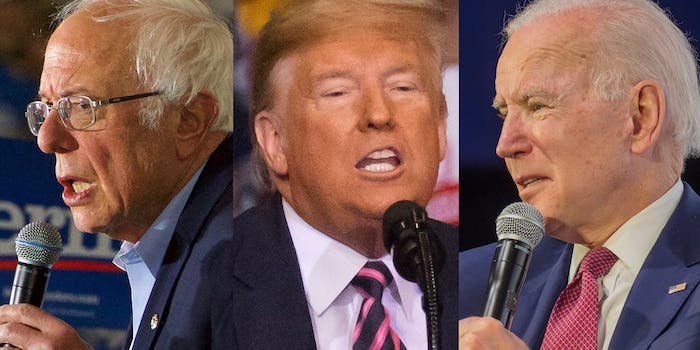 Why Trump fans are calling the Democratic primary ‘rigged’

On Super Tuesday, Vice President Joe Biden pulled out an unexpected string of victories, catapulting him above Sen. Bernie Sanders (I-Vt.) for the lead in the 2020 Democratic Primary.

And now many people want you to believe the results were rigged.

But the push isn’t coming just from frustrated Sanders’ supporters, who are upset about long voting lines and a last-minute coalescing around Biden from other candidates.

It’s far-right Republicans who are pushing the narrative to sow discourse.

Both President Donald Trump and his son helped push the story, calling it all part of the Democratic National Committee’s master plan to keep the nomination from Sanders.

While their intent is merely to sow discord to prevent Democratic unity against Trump in the general election, there are fervent Sanders supporters who believed Sen. Elizabeth Warren’s (D-Mass.) decision to stay in cost him votes—and many Warren supporters were on the receiving end of vitriol last night.

But Biden surging ahead of Sanders by wrangling key endorsements isn’t evidence of “rigging.”

It may be the kind of backroom political maneuvering Sanders and his fans protest against, but it’s perfectly within bounds. And numerous mainstream Dems pushed back against the claims of any untoward action by the Biden camp or the DNC.

The next slate of primaries is Tuesday, March 10, when Michigan, Washington, and five other states vote. That’ll be when we can have this discourse all over again.